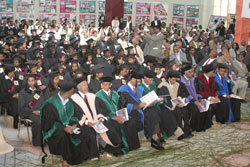 Agriculturally summer is a fertile season. The time that stretch between June and September is a rainy season where farmers and consumers of farm productions alike fill with hopes of gathering bumper harvest. During the summer times herds are endowed with green grazing meadows, water reservoirs impound sufficient water that could sustain until the next summer.  Summer is a time of get-together where a number of Eritreans from diaspora visit their homeland. The National festival is also held in this season on the expo-grounds featuring a number of shows. Summer is indeed a time where every national with one accord get excited and rejoiced. Even though its impact for the very existence of humans still remains incomparable, summer is also a season of graduation events where institutions of higher education harvest fruits of their endeavors. The graduation events held each year are usually accompanied by a number of festive events and particularly of nature’s benevolence. In the months between June and July, that is almost every week, all institutions of higher education and colleges of vocational trainings would hold commencements one after the other. Some colleges have already started the reaping of harvest starting from the first week of June and the others would follow in the coming days of June and July.

The graduation season has already started with the commencements that have been held staring from 8th June 2012. A total of 122 students graduated on 8th June from the College of Marine Science and Technology in the disciplines of sea farming, fishery resources and marine biotechnology have opened the curtain of the graduation season. Of the 122 graduates of this academic year, the 50 have earned degree and the 72 are diploma holders.

The graduation event of the College of Marine Science and Technology has resulted to a chain of ripple effects. Thus, other colleges too are to hold graduations one after the other. Following to that of College of Marine Science and Technology, a total of 101 students graduated in certificate on June 26 from Hagaz Agricultural and Technical School in Animal Science, Agro-mechanics, Plant Science, as well as Soil and Water Conservation. What is more is, a total of 126 students also graduated in diploma on June 24 from Wina Technical School, Nacfa, in the fields of electricity, wood and metals works as well as auto mechanics and engineering. Wina Technical School which opened in 1985 in Arag during the armed struggle for independence was reestablished in 1997 to offer as many training courses with an enhanced mannar. Let’s see also some additional harvests of the education sector in this current academic year.

Graduation dates of institutions of higher education such as Asmara college of Health Sciences, Eritrea Institute of Technology (Mai-Nefhi), Hamelmalo Agricultural College, Halhale College of Business and Economics and College of Arts and Social Sciences (Adi-keyih) is scheduled to be held from 30th June to 19 July 2012 respectively.

Apart from University of Asmara, Eritrea Institute of Technology (EIT) is among the pioneering institutions of higher education that were opened in 2004. As its name suggests, EIT has been educating students in technological fields such as in different specialties of engineering, computer sciences and computer technology, as well as in earth sciences. This college also offers teachers training courses. This college started to offer courses in different disciplines since its very opening and it has also started to offer new courses in mining, hydrology and water resources, architecture and town planning. Most of the new courses have been introduced in EIT as of September 2010. The EIT is now making due preparations to hold 4th round commencement on July 7, 2012.

College of Arts and Social Sciences and College of business and Economics were temperately situated within the premises of EIT, but with the finalization of construction activities, these colleges were later moved to Adi-keyih and Halhale respectively. These two colleges which were once situated within one premise are now making preparations to colorfully hold their 4th commencements on July 7 and July 8.

Hamelmalo Agricultural College which has been nurturing specialists in different disciplines of agriculture is also to graduate students with degree and diploma on the same day with EIT, that is on 7th July 2012. The graduation ceremony of Asmara College of Health Sciences that will be held tomorrow 30th June is going to be a clothing of the commencements that has been held in June, but this is not the last ceremony for the Colleges of Business and Economics, Arts and Social Sciences, EIT and also Hamelmalo Agricultural college are to see fruits of their endeavors starting from July 7-to-July 19. This year’s summer seems to be a happy rainy and graduation season.

The Second and Unity Congress and its outcome