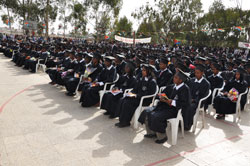 Asmara Teachers Education Institute graduated 569 students in certificate, 131 of whom are females.

Speaking at the graduation ceremony, Mr. Alem Gebrekal, director of the Institute, indicated that the Institute is exerting endeavors to meet growing demand for teachers in line with the country’s expanding educational facilities. Stating that the capacity of the Institute’s library has become a considerable resource for students, he called on the graduating batch to play an exemplary role in their career.

Mr. Petros Hailemariam, director general of human resources development in the Ministry of Education, called on them to work hard for the realization of the cherished goal as regards education.

The representative of the graduating batch on his part asserted that they would serve the country with dedication.

Reports indicated that 58 out of the graduates pursued studies in the Arabic language.

Trees within the Kakibda-Adebzage enclosure flourishing well, say the inhabitants