Debre Sina: Pilgrimage To One Of The Oldest Eritrean Monasteries 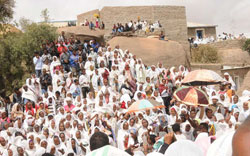 Eritrea is endowed with several and different historical and cultural monuments that stand witness to the historical wealth of the nation and its people. Every patch of land has a profound history to narrate and tell; every corner of the country embraces histories within its belly. Eritrea’s population is diverse, reflecting many languages, cultures, religions yet living together with harmony under the umbrella of unity. This unity makes the people even stronger with each passing day. Eritreans are also known for their friendly and generous nature, not to mention their unique trait of hospitality, which has been a trademark characteristic for years.

Eritrea has also been endowed with natural and cultural heritages that are appealing and attractive to tourists. Beautiful landscapes in the highlands and lowlands, valleys, mountains, hills, and ridges are awe inspiring to anyone who happened to visit those places. The picturesque landscapes, which are seasonally blanketed by green carpets of grass, flowers and bushes, are indeed breathtaking to the viewers and a soothing sight to the sore eyes.

The cultural relics including remains of houses and household utensils to architectural ruins, tracing their times to ancient human civilizations are found in this very land, spreading in every corner of the country. There are different historical places: the Steles of Metera and Qohaito; the monasteries of Debre Sina, Ham and Debre Bizen; Mariam Dearit; the Liberation Struggle trenches in Nakfa; rock paintings in Karura; ancient ports of Zula and Adulis… the list goes on.

The Anseba Region is home to some of the most prominent historical sites in the country, one of them being the Monastery of Debra Sina.

Situated in the Eritrean highlands, just around 18 kilometers east of the town of Elabered, on the Asmara-Keren road, the Monastery of Debre Sina is a site of pilgrimage by Eritrean Orthodox Tewahdo believers each year in the month of June.

The Debre Sina pilgrimage includes thousands of ordinary Eritrean believers camping for one night in the village of Debra Sina, singing, drumming, chanting and celebrating the Virgin Mary.

The journey from Elabered to Debre Sina is quite an arduous one. One has to climb to the monastery through a steep slope dry weather road; very challenging for buses to go through. It’s common to see cars breaking down along the way.

What is annoying is the fact that when one car breaks down, all the others following it have also to stop and find a way of passing along that narrow and zigzagging road. However, in most parts of the route, the road is so narrow that one car can hardly pass aside the other car, thus the only solution being to wait until the car was repaired. Well, you can guess how exhausting it can be to just wait and wait until the car or bus is fixed.

During the celebration this year, there were more than 300 buses and countless smaller cars making their way to the monastery.

Many more pilgrims were also going on foot all the 18 kilometers, climbing the hill and carrying their food and drink. Even though the journey was exhausting, they managed to reach their destination safely. Many Eritreans also came from abroad just to celebrate the day.

Here, I witnessed the generosity of Eritreans. People, I think they were inhabitants of the area, were offering free water and food to those who were climbing on foot. They welcomed these complete strangers to their house for shelter. Some of the inhabitants were also offering Siwa (traditional drink) to anyone who passed by their doors.

When we reached the monastery, everybody was so relieved to reach at the top of the mountain. Finding a parking lot was another difficult mission. After getting off the buses and cars, everyone started packing and

arranging their things, then walk for about a kilometer to the church, call the time carrying our belongings.

Once again, I observed the kindness of the youth and children of that area. They ask you if you need any help and offer their hands to support to carry your belongings. You feel so proud to be part of this harmonious and loving people.

When we reached to our final destination, we could see down to where the buses were parked. There you can’t help but notice how all those buses made out that almost triangular shape of Eritrea. Everybody was happy and cheered with amazement.

The pilgrims were singing praising song all the way the 83 kilometer starting from Asmara. The themes of their songs were God to bless Eritrea, peace to prevail, to have peace and love with one another, the safely to their respective homes and to have a good rainy season. What the mothers were asking to St. Mary through their songs all the way were really heart touching and astonishing. Both Muslims and Christians make the pilgrimage to Debre Sina.

The landscape inside the monastery is unbelievable. Every rock you see seems to be carved out by a great architect. The pilgrims continue praying all the way into the night and the net day. Despite the freezing night air, the pilgrims were kept praying and chanting praise hymns.

The older, inner part of the church (which unlike many monasteries in Eritrea is open to both men and women) is hewn from rock and, according to local tradition, is 2100 years old. The troglodyte dwellings of the 60 nuns and priests who live there can be visited.

One of the oldest religious sites in Africa, thought to date from the 6th Century AD, Debre Sina could play a great role in reviving the tourism industry in Eritrea. And for that to happen, we have to work hard towards developing the basic infrastructure and especially the road that leads to the monastery. The Ministry of Tourism has to work relentlessly to guarantee easier and more comfortable accessibility to the place, so as to make it a tourist-luring site.

The cause of the minor rift witnessed in Barentu sub-zone is thick alluvial overburden: Ministry