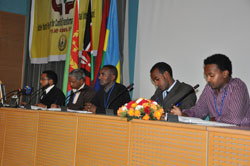 According to reports, various discussions were conducted based on the research papers presented and issues raised by representatives of youth institutions and organizations from the Republic of Sudan, Mauritius, Republic of South Sudan, Somalia, Tanzania, Rwanda, Uganda and Egypt, among others.

The Forum forwarded proposals pertaining to the launching of website and journal publication aimed at fostering exchange of information, creating conducive environment in which youths could enhance their capacity, setting up Youth Assembly in the respective countries, and facilitating the implementation of Pan-African Youth Association’s strategies, in addition to ensuring active youth participation in economic, political and social domains.

The participants of the Forum underscored that the Horn region is endowed with major youth capacity and natural resources, and that serious ventures should be resorted to so as to effectively exploit it.

One of the participants, Ms. Rigat Tesfamichael, an Eritrean citizen, pointed out that women’s role in the armed struggle for independence is exemplary to youth associations in the region, and that it should seriously be popularized.

Mr. Benjamin Mongi and Mr. Mohammed Ali Mohammed, youth representatives from Kenya and Somalia, stressed that joint venture on the part of youths from East African countries is vital in reinforcing youth participation in a number of national domains.