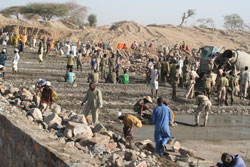 In Eritrea, for that matter in many countries, the youth comprises the majority of the population of a given country. And if that is the case, all activities involving the country falls on the shoulders of the youth. Safeguarding the sovereignty of the country, development endeavors, civic and community activities, etc. need the active participation and involvement of the youth. By and large, we could argue that any activity without the participation of the youth is not complete or half done.  The youth has the responsibility to drive a country into a higher stage of development. There are also youths in different countries that have a negative role in the making and existence of a nation. It is a common phenomenon to witness youths especially in the so-called developed countries resort to drug addictions and violence. Hence, those countries depend their continuity as a nation from the youths of developing countries through the infamous brain-drain programs.

In a nut shell brain drain may seem to mean youths with different skills migrating to the developed countries for a better opportunity, the opportunity they may not find in their own country. But in reality, if we look at the brain drain program in its motive implies, and that has been proved true in many instances, is a deliberate attempt to disrupt the progress of a nation and deny its people the much needed peace to continue and sustain as nation.

The pre-independence history of Eritrea is characterized mainly with colonialism, subjugation and the struggle for national identity and independence. Different colonialists came in different times pursuing to exploiting the natural resources of the country so that they enrich and supply their heavy industries with the needed raw materials. History tells us that in ancient times when the large part of today’s Eritrea was called the ancient land of Punt Egyptians, the Greeks and Turks were coming in search of precious and other construction materials including precious stones, ivory, coral reefs, etc. Hence, the need of material resources by outsiders from this region began from those days and continued until the end of the Second World War.

The Ethiopian colonialism that illegally took over exploiting the covert intervention of the then superpowers had different agenda and motive.  We could not claim that the Ethiopian colonialists were after the natural resources of Eritrea for they were by far inferior in all aspects of development that they had no infrastructure or industry to develop through the natural resources of this country. By the time the Haileselasie regime illegally annexed Eritrea with the full backing of the superpowers, especially the US administration, it was still under the feudal system in which its people were suffering from illiteracy hunger and discrimination. Hence, the fact that they were after Eritrea was to exploit the resources of the country to enrich their private family wealth and assets. The fact that the motive of the successive Ethiopian regimes that “We need the land and not the people” tells the reality.

At the time when the existence of the country was at stake, different approaches were being taken to restore the identity of Eritreans and to ensure the independence of the country. Eritreans  especially the youths resorted to initiating armed struggle to defend their rights and national integrity that could not be realized through peaceful means. And hence, September 1, 1961, witnessed the first gun shot to pronounce the beginning of the armed struggle for independence.  Since then the Eritrean youths have to go through thirty bitter years to finally succeed in realizing their dream and put Eritrea and it people in their rightful place in the books of history. Those elderly and children who could not join the armed struggle fled the country to seek refuge elsewhere to avoid the killings and imprisonments perpetrated by the Ethiopian colonial regimes. Those Eritreans living abroad had never for a second detached themselves from the reality happening in Eritrea, they were after the struggle spiritually and physically.

Immediately after independence the country witnessed the flock of Eritreans from every corner of the world coming home to celebrate their independence and visit their loved ones that were separated for many years due to colonialism and its system. Every where one goes in the country there was no lamenting of the sacrifices of their loved ones but ululating for the precious gift they gave and family reunions.

The then Provisional Government of Eritrea did not spare any time to engage itself and mobilize the people into reconstruction and rehabilitating programs. That was the beginning of the headache of those who, from the onset, were not ready to see Eritrea succeeding as a nation and able to exist as a country and develop itself. Many told and untold conspiracies were being weaved against the country. When all the conspiracies they thought viable was doomed into emptiness they ultimately resorted to stealing the minds of the youth through lies and impractical promises. And when they were convinced that their propaganda paid of they waged a proxy war against us through their agent the TPLF. What happened then? Their entire attempt ended up into zero-sum.

What happened during the successive TPLF aggression is yesterday’s history that every one knows, the Eritrean people a well as those who instigated the aggression. The footages of Egri-Mekel, Adi-Begio, the desert plains of Assab and the Mereb-Setit fronts tell the stories by themselves. They created a shocking emotion on the part of the enemy and its patrons until they loudly cry and deny their dead soldiers as their own. We remember the public relations officer of the TPLF questioning in the open “Who said that the dead soldiers lying on the ground at Egri-Mekel are Ethiopian soldiers”. This is denial in its highest form by a regime that was supposed to take responsibility of the safety of it people and not denying their identity.

The Eritrean youths, as gallant as they are ever, without any national call heralded to defend their land. No Eritrean is ready to see the history of colonialism, suppression and suffering being repeated. They fully comprehend that the suffering of their fathers and mothers had been enough and not be repeated in their life time and generations to come.

The conspiracies against Eritrea did not end with the open aggression through the TPLF servitude. They resorted to try with other heinous attempts they though could work, physiological warfare. The physiological warfare was and is targeted on the youth through creating imaginary “heaven” they think would attract the youth. The end result, as we see it, ended up to the contrary of their wish thinking. No Eritrean would give up its identity at the expense of what the enemy quarters would like to see.

Eritreans where ever they are never detach themselves from their Homeland and compatriots. The thousands of Eritrean youths coming home from different parts of the world to join the 5th Youth Festival in Sawa are the vivid testimony of the reality of what Eritreans really are. No matter the magnitude of propaganda disseminated to steal their minds, Eritreans are Eritreans and never dream or aspire to become otherwise. The country that came into reality with the heavy sacrifice of its loved ones is never to be abandoned through the white propaganda of the enemy. They rightly understand that the enemy would never provide “Samaritan” advice for the better of the Eritrean youths. They know how Eritrea was denied its right to exist as a nation and no miracle would happen that they change their minds for the betterment of the country this time.

The Eritrean youths understand and steadfast to contribute whatever in their disposal to develop their country under the banner self reliance that they inherited from the past and present generations.

5th commencement of EIT Ensures the Rise of Professional Skills