Input of Youths in Food Security 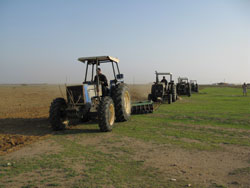 Institutions of higher education have been nurturing experts in different fields of studies. Youths graduated from Hamelmalo agricultural institution and other vocational training centers have been playing due role in the agriculture sector as researchers, farmers, technical guiders, operators of farm machineries and much more. An interview conducted with Engineer Henok Eyasu, from the Ministry of Agriculture, highlights some of the input of Eritrean youths in the agriculture sector. Experts follow:

Food security is among the topmost national priorities. How do you see the role of youths in realizing the envisaged goal?

The role, youths of this country have been playing in food security to date could not be viewed lightly. They have been indeed playing major roles. As I could see, in the National Institution of Agricultural Research, the youths I am working with never give up in bringing transformations. Machinery operators, extension workers and others working in the construction of water diversion canals and in conducting agricultural experiments are doing their level best in all dimensions.  And their readiness and devotion to implement any projects in any field of agriculture sector is really appreciable.

International Food Policy Research Institute (IFPRI) has set a goal, at international level, to reduce food deficits by 50% in 2015. What is your opinion on this and particularly in the view point of youths’ accomplishments towards meeting the set goal?

I think we are on the right track. We could not succeed relaying on seasonal rain. But, what we did is that dams were constructed, irrigation based agriculture was widely introduced and efforts have been exerted in the

introduction of mechanized system of Agriculture and youths have been actively involved in the implementation of all agricultural infrastructures. All the efforts youths of his country have been making are directed towards the realization of food security.

Rather than finding a lasting solution, developed countries have been working to maximize the amount of food aid. What could you comment on the endeavors made to achieve food security based on the principle of self reliance and that of youths participation?

Youths have acquired adequate knowledge since the inception of Warsay-Ykealo Development Campaign. Food security is also among the targets that were charted out to be realized within the overall framework of the development campaign. The opening of higher educational institutions has indeed added momentum to the introduction of knowledge based agriculture. The know-how that has been acquired in such institutions would soon be converted into tangible outcome. What should we notice here is that, food security could be achieved based on local resources and if not sufficient through the purchase of food items. It is in fact a matter of choice and no one could force one to accept aid. The ultimate goal is that people should not starve so as to conduct day-to-day activities with a robust health. Thus, the role of youths in food security has been very tremendous.

In traditional farm practices, famers used to harvest about 7 quintals per hectare. But experiments have been conducted in cereal crops such as millet, wheat, sorghum, barley, bean, and maze. Provided that all the necessary inputs like fertilizers and pesticides have been applied, the farmers could from scientifically studied verities of seeds harvest four folds of what they used to gather. For instance, farmers highly demand a sorghum variety scientifically named ISV111 for its ample yields. Of course, it is not the endeavors made by the farmers alone that boost production. There are youth experts who have been working in water and soil conservation, giving technical guidance to the farmers. One needs to note that there is ample contribution of youths behind the success of any farmer.  But, the farmers should multiply the production of the select seed so as to widely use it.

Agriculture should not be narrowly viewed for the educational perspective. We need to notice that there are a number of exemplary traditional farmers who are admirably making remarkable achievements beyond the expectation. What we usually do is that we just give them some guidance for they have acquired the desired know-how through experience. So, the participation of youths is really commendable in all dimensions.

What could you say about the impact of youths’ involvement in the future of this country’s Agriculture sector?

There is a bright future ahead. Hamelmalo Agricultural College alone could contribute a lot. Since, every youth is accepting agriculture as a good profession and as there has been change of view in the agriculture sector, there would be indeed a huge achievement in the future.

The demolishing of Nadew Iz and its aftermath (Part II)