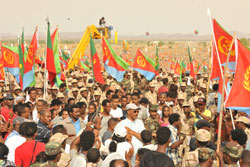 A group of journalists took a drive from Asmara to Sawa on 11th July to give coverage to the 5th Eri-youth Festival held under the theme “With Foresight; we make ample strides forward”, from 13 to 15 July 2012. Observing the number of buses, minibuses and cars that were heading in queue to the Sawa grounds, one could only imagine that these are newly imported vehicles that were about to be distributed to the entire Eritrea but not to transport such huge number of people who are to be part of the very exciting Festival.

On arrival at Sawa, thousands of people got off the buses which made a seemingly never ending multi-hued queue.  The on looker could learn from the lengthy line the buses made that huge number of people had arrived at Sawa for the 5th Youth Festival. Everybody was then very eager to see the official opening of the festive event that would feature very enthralling shows for three consecutive days.

Early morning of 13th July, participants of the festival who flocked to Sawa starting from 11th July; and members of the 25th batch of the National Service marched to Sawa stage. The festival was then commenced with the speeches of Col. Debesay Ghide, head of Sawa Center for Education and Training. Col. Debesai said that during their one year stay in Sawa, members of the 25th round of the National Service have reached this stage courageously overcoming social, academic and military challenges. Mr. Sultan Saied, Chairperson of National Union of Eritrean Youth and Students (NUEYS), on his part congratulated the graduates of 25th round of the National service, parents and the participants of the festival. He also said that the post-independence period was an era of development where Eritrean youths demonstrated steadfastness in pursuing independent political path and clear vision in combating external conspiracies.

The members of the 25th round of National Service made a harmonious military parade. The strides they made and the waving of flags were just very enthralling and eye catching.  Following to the military parade, Yohannes

Tikabo (Wedi Tikabo) presented a song titled “Warsay Ghedim.” In his song, Wedi Tikabo, tries to reflect the endeavors the Eritrean youths exerted in safeguarding and building the nation. As the song highlighted, the youths have created a watch of their own that counts time in their heart beats. The youths of the post-independence period are now veterans for they bequeathed the experiences of veterans and are also bequeathing such an experience to the youngsters. So, the novice is also a veteran and creator of a new season. As Wedi Tikabo puts in “Warsay Ghedim” the contributions youths of this country have been making in all sectors of development enabled them to be veterans for they acquired the required expertise. Other stanzas of the song also describe on how the youths manage to accomplish multiple tasks of development and safeguarding the nation. All in all, there is nothing the youths have not put their hands on.

Dawit Teklesenbet (Shilan) approached the stage with his song “Harem” which also triggered warm applaud. In this song, Shilan uses the harem (Pyramid) as a symbolic representation of the wonders Eritrean youths have been accomplishing. Next to Shilan’s song, a musical drama titled “Weghi Akal”-roughly translated as a dialogue with body parts and sensations was staged. This musical drama was accompanied by local music and by musical performances of Eri-Artista and musicians from South Africa, Rwanda, Uganda as well as from the Republic of Sudan. Approaching the stage next, Helen Meles sung “D’bab”. In her song, Helen highlights that Eritrea is fortunate enough for the ceaseless heroism of its people becomes a shield to safeguard it from any sort of eventuality. Other attention grabbing musical shows were also featured.

Following to the artistic shows and the military parade, President Isaias Afwerki, Gen. Sbhat Efrem, Minster of Defense, and Mr. Alamin Mohammed Saied, Secretary of PFDJ awarded the 25th National Service batch for the outstanding military excellence they demonstrated. In a speech he made President Isaias highlighted that significant events taking place in Sawa , including the graduation of 25th round of National Service as occasions where the trust to martyrs is honored with pragmatic deeds. The President also said that the youths have accomplished what is expected of them in safeguarding the nation’s sovereignty as well as in laying firm foundations for the nation-building process.

In the very same day, President Isaias inaugurated the pavilions of exhibitions, innovation and renovation and the overall cultural performances of the youths of the 6 administrative regions of Eritrea that were staged in Sawa grounds. The pavilion of invention and renovation displayed a variety of invention and innovation works of the youths. One could see that graduates of higher educational institutions have come up with appreciable works. For instance, Civil Engineering graduates from EIT have, as their senior project, drawn a plan for a museum in the shape of shida (a plastic sandal) which the freedom fighters used to wear during the struggle for independence.

Another youth, Abrhe Yemane, has also developed a multilingual electronic dictionary that translates from English to three Eritrean languages – Tigrigna, Tigre and Arabic. He also plans to include the rest six Eritrean languages in one package.

What the youths accomplished in the field of Computer Engineering is really remarkable. Other youths have also developed soft wares for Geez type tutor that is basically similar to Mavis and other type tutors. Even though extra endeavors need to be exerted to make it a standardized Geez spelling and grammar checker, the efforts Computer Engineering graduates of 2012 made in adding a Geez spelling and grammar checker to Microsoft office is a very admirable accomplishment of the youths.

Exhibition of paintings, sculptures, hand crafts, machines, and displays of out dated cameras, cultural performances of the nine ethnic groups, sports activities among others were activities that added color to the festival. In the evening hours of 13 and 14 July, the participants of the festival enjoyed music performances of EriAm Sisters and Njoy both of which are from diaspora. Crane Performers from Uganda as well as Miss Jojo from Rwanda and Lebogang Masemola from South Africa along their music crew also staged very fascinating shows and their talent that received acclamation from the audience.

This year’s festival was very unique for youths with extraordinary talents were exceptionally awarded. The NUEYS made due preparations to award the youths who demonstrated outstanding excellence in different fields. Based from the outlook of giving recognition to youths’ excellence, first of its kind award was introduced in the 5th youth festival. The Soira Award which is named after Eritrea’s highest mountain is aimed at awarding talented youths who demonstrated highest excellence.  Seventy four works of the youths competed for Soira Award, however, out of which only four have become legible for the first level award of excellence. Accordingly, youths who have developed three internationally accepted mathematical theorems, who made due contribution in boosting the production of wheat and sorghum through scientific studies, who also scientifically proved how effective traditional medicines are in curing diseases, as well as a youth who scored remarkable results in international competitions have become the first winners of the Soira Excellence Award. Each of the winners received an award of 100,000 Nakfa.

Seven works that were legible for the second level of Soira Award were studies conducted in the field of mathematics, also cyclists and athletes who won international competitions,  a youth who made due contribution in boosting diary production through  upgrading farmers awareness, a youth who made endeavors to develop electronic dictionary that translates from English to three local languages, a youth who introduced the technology o

f harvesting water from the clouds, youths  who renovated smokeless oven and others who made contribution in minimizing power consumption of electric ovens.

The evening hours of Sunday, 15th July, was time for the closing of the festival. The sun was about to set. In front of Sawa stage, a number of buses made a multi-colored background in a single lined queue. At the two sides of the stage the national flag and a white flag that holds the logo of the Eri-youth festival were waving high just in front of the huge number of people who took their seat to watch the shows that are about to be staged.

Children under the age of 13 and a father made an amazing opening with drum beats which called everybody’s attention. The sound of the drums echoed to all directions of the stage and was accompanied by claps and sounds of horns that were blown as a sign of the intensifying excitement. Accompanied by the horn blows, Mohammed Al-Hassen, a singer from the Republic of Sudan, approached the stage with his Arabic song. Next to it, different music performances and drama shows continued.

In the closing ceremony, Mr. Ibrahim Hassen, chairperson of the NUEYS’ holidays coordinating committee, said that the youth festival has become a platform that reflected the highly unnoticed and unexploited youths’ talent in varied disciplines. Mr. Alamin Mohammed Saied, Secretary of PFDJ, also in the closing ceremony, said that Eritrean youths played a leading role in the history of the Eritrean people. He added that the potential of the youths reflected in the festival is of a paramount importance in inspiring the spirit of nationalism. During the occasion, Mr. Alamin handed over certificate and monotony award to the winners of cultural shows from the six administrative regions

As in the opening, Wedi Tikabo then approached on the stage to sing Warsay Ghedim. Everybody flocked to the dance grounds. Standing from their seats, Crane Performers from Uganda also danced the Eritrean beat as if they are native to it. While the song still continues fireworks filled the skies of Sawa and every observer got excited and started to feel so nostalgic for the festive event that continued for three consecutive days concludes.

The successive offensives and liberation of Eritrea (Part I)