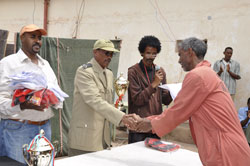 Tsetserat Prison and Rehabilitation Center graduated prisoners who have been attending academic and training courses.

Speaking at the graduation ceremony conducted on July 25, Lt. Debesai Gide, Acting commander of the Prison and Rehabilitation Center, indicated that the academic and training courses which have consistently been given are a demonstration of the Institute’s goal of nurturing productivity to citizens who commit crimes while disciplining them.

Mr. Kifletsion Gebreyesus, Administrator of the Center, explained that similar endeavors are consistently made by prison and rehabilitation centers nationwide with a view to enhancing production capacity of such citizens.

Students and trainees who demonstrated excellence were awarded prizes during the ceremony that also featured display of artistic works.

Matriculation Examination results to be out tomorrow: NBHE