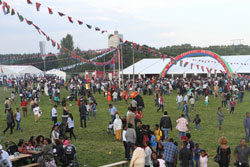 The Eritrean community members in the Scandinavian countries conducted festival with patriotic zeal from 2 to 5 August in Stockholm City.

Asmara, 8 August 2012 – The Eritrean community members in the Scandinavian countries conducted festival with patriotic zeal from 2 to 5 August in Stockholm City.

Reports indicated that the event that witnessed participation of thousands of Eritreans from different European countries, the US and Canada, also featured a number of activities focusing on children and youths.

In a seminar he conducted with the participants of the festival, Mr. Yemane Gebreab, Head of Political Affairs at the PFDJ, explained that the Eritrean government is making enormous investment with major focus on the rural areas with a view to ensuring social justice and sustainable economic development, and that increased endeavors would be exerted to give added momentum to the nation’s development process. He further pointed out that the country is in a stage where its bright future is becoming progressively evident thanks to the spirit of steadfastness among citizens inside the country and abroad in foiling anti-Eritrea agendas.

Stating that the secret behind the Eritrean people’s triumph constitutes the prevalence of coherence within the citizenry, Mr. Yonas Mana from the Eritrean Embassy in the Scandinavian countries explained that such an event is vital in nurturing national values.

The fact that the Eritrean people paid all-round sacrifice to ensure and safeguard national independence attests to the abiding spirit of nationalism among them, said Mr. Alem Teklegiorgis, chairperson of the National Holidays Coordinating Committee for the Eritrean communities in the Scandinavian countries.

Among the participant youths, Robel Kidane voiced conviction that the impact of such an occasion goes beyond festivity, and that it is imperative as regards discussing the objective situation in the Homeland and bequeathing national values to future generations.

More than 180,000 Nakfa extended in support of martyrs families