A Glance into the Holy Month of Ramadan … 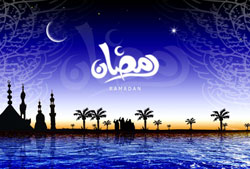 (A compilation from several resources)

We are already past halfway into the holy month of Ramadan. Ramadan Kareem to all the Muslim faithful! Ramadan may imply nothing more than the name of the holy month of fasting for all Muslims. But, as is the case with all Arabic names, name of months have a special meaning and significance.

Names usually refer to stories or specific incidents: some are historically documented, while others come from traditions and legacies handed down from generation to generation, but cannot be verified.

Most resources agree that the name Ramadan is derived from the source ramad, meaning heat or, more specifically, the intense heat of the sun. This most probably relates to the daytime fasting that Muslims are expected to perform during Ramadan.

Ramadan is a Muslim religious observance that takes place during the ninth month of the Islamic calendar, believed to be the month in which the Qur’an began to be revealed.

Prayers, tsawm (fasting), which is one of the Five Pillars of Islam, charity, and self-accountability are especially stressed at this time; religious observances associated with Ramadan are kept throughout the month.

In Islamic belief, Prophet Mohammed was spoken to by Allah on a date known as Laylat al- Qadr, or the Night of Power. Allah gave Mohammed the teachings of the Qur’an and set him on his path to becoming a prophet and the founder of the Islamic faith.

All Muslim sects believe that the Night of Power occurred during the month of Ramadan, although there is some disagreement as to the specific date. Still, the event is so much a cornerstone of Islam that the entire month is given over to its remembrance.

Ramadan is a time when Muslims are to slow down from worldly affairs and focus on self reformation, spiritual cleansing and enlightenment, establishing a link between God Almighty and themselves by prayer, supplication, charity, good deeds, kindness and helping others.

Since it is a festival of giving and sharing, Muslims prepare special foods and buy gifts for their family and friends and for giving to the poor and needy who cannot afford it, this can involve buying new clothes, shoes and other items of need. There is also a social aspect involved – the preparing of special foods and inviting people for the Iftar meal (the meal to break the Fast).

In many Muslim and non Muslim countries with large Muslim populations, markets close down in the evening to enable people to perform prayers and consume the Iftar meal – these markets then re-open and stay open for a good part of the night. Muslims can be seen shopping, eating, and spending time with their friends and family during the evening hours.

One of the puzzling things about the month of Ramadan is its migrating calendar.

The fact is that the old Arabic calendar was based on lunar months and solar years. This meant that the year was composed of 12 lunar months, but the Arabs of old times would allow for the shift of the months within the seasons by adding an extra month every three years. This was known as ‘postponement’, the aim of which was to ensure that the months conformed to both the seasons and the solar year.

Most historians give several reasons for ‘postponement’. One reason was the commercial and trade considerations of neighboring markets, with the Syrian calendar in use in the Levant and the Coptic calendar in Egypt. Another was to have definite dates for certain rituals, celebrations and festivals (like the yearly pilgrimage, Hajj, and the ancient open Okaz market, for example), allowing these events to take place during specific seasons and climates.

Nowadays, however, Muslims observe an 11-day, annual shift of Ramadan within each solar year. This is because Islam forbade ‘postponement’, considering it to be a violation of the rules of the sacred months. A verse in the Quran states:

Postponement (of a sacred month) is only an excess of disbelief whereby those who disbelieve are misled; they allow it one year and forbid it (another) year, that they may make up the number of the months which Allah hath hallowed, so that they allow that which Allah hath forbidden. The evil of their deeds is made fair-seeming unto them. Allah guides not the disbelieving folk.”

Many Muslims insist on the local physical sighting of the moon to mark the beginning of Ramadan, but others use the calculated time of the new moon or the Saudi Arabian declaration to determine the start of the month. Since the new moon is not in the same state at the same time globally, the beginning and ending dates of Ramadan depend on what lunar sightings are received in each respective location. As a result, Ramadan dates vary in different countries, but usually only by a day.  This is due to the cycle of the moon. When one country sees the moon, mainly Saudi Arabia, the moon travels the same path all year round and that same moon seen in the east is then seen traveling towards the west. All the countries around the world see the moon within a 24 hour period once spotted by one country in the east.

Each year, Ramadan begins about eleven days earlier than in the previous year.

Ramadan remains the month for purifying the spirit, doing good to others and seeking forgiveness and blessings.

Life is about traveling