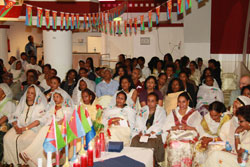 The Eritrean communities in Holland and western USA conducted festivals from 10 to 12 August with patriotic zeal.

Asmara, 13 August 2012 – The Eritrean communities in Holland and western USA conducted festivals from 10 to 12 August with patriotic zeal.

The festival that was conducted in the Dutch city of Amsterdam featured a number of activities and participation of thousands of citizens and compatriots from Holland and other European countries.

In a seminar he conducted with the participants of the festival, Mr. Abdalla Jabir, Head of Organizational Affairs at the PFDJ, gave extensive briefings as regards the nation’s progress and the people’s steadfastness against external conspiracies. He also said that anti-Eritrea agendas would result in utter failure thanks to the people’s readiness to mount staunch resistance against such agendas.

Mr. Solomon Mehari, First Secretary of the Eritrean Embassy in Holland, called on youth participants to enhance participation towards the achievement of building a prosperous nation. Mr. Asefaw Tafla on his part explained that such event is vital in adequately reflecting national and cultural values, besides the ground it provides for discussion on the domestic situation in the Homeland.

Reports indicated that performances by Keih Meriet Cultural Troupe added color to the festival of the Eritrean community in Holland.

Meanwhile, the vibrant festival conducted in the US city of Oakland, adequately depicted the Eritrean national values and the development accomplishments being registered in the Homeland. The nationals residing in western USA voiced readiness to foil anti-Eritrea conspiracies.

Endeavors underway to introduce Technology and Information System Education at all levels: Ministry