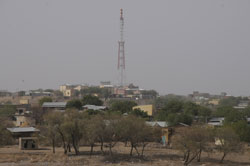 In this semi-urban center, there is one junior, another primary and secondary school, a healthcare center as well as an elementary school that teaches in Arabic language. Even though endowed with good water supply resources and is situated in a strategic area, Omhajer is still a less developed area.

According to Mr. Daniel Oqubazgi, Administrator of Omhajor semi-urban center, there are some deficits but are not to be considered as major challenges.  As regards the supply of electricity, Omhajer has been gaining access through concerted efforts of individuals.

The semi-urban center has a sufficient supply of potable water. The Government has constructed a water reservoir tanker in 2002 and there are two wells that were constructed during the Italian colonial era.  What the inhabitants of Omhajer most care for is ensuring the sustainability of potable water supply. To do so, they have allocated sufficient budget for integrated water management. As regards healthcare, the inhabitants have been receiving good service.  Heavy healthcare issues have been addressed through sending patients to referral hospital. The ambulance in the healthcare has been facilitating the referral services.

Like in many parts of Eritrea, the people of Omhajer try to solve any deficit thorough active personal involvement in every development endeavor. And they have been succeeded in alleviating some challenges. For instance, the inhabitants of this semi-urban center have been making monetary contribution for the installation of electric power supply. As the government has planned to install a generator, “the around 400,000 Nakfa the inhabitants of Omhajer contributed would be used for efficient management service,” Mr. Daniel said.

Omhajer semi-urban center is known for its vast and fertile agricultural plains. The inhabitants of this semi-urban center have been united to make a difference for betterment of their livelihood. Hence, they have been making due contribution in the efforts exerted to judiciously utilize water supply for agricultural purposes. In this summer, tractors have been assisting farmers in leveling farm lands and in water conservation activities so as to make any drop of water be absorbed.

Omhajer is one of the early founded semi-urban centers of the country. But, it has not been developed as it should be. This being the fact, the semi-urban center has a better future for it owns an efficiently designed master plan which is expected to make due contribution in its fast growth.

Omhajer is also a better place for livestock feeding for it is endowed with sufficient water supply.  If exploited, this area could become an income generating area. Any on looker could be amazed to see that a number of cattle and camels from different areas of the country flock to this area for green meadows every year during November and December. In livestock, Omhajer is indeed the topmost richest area of Eritrea. Its livestock and other vegetation resources and much of other potential resources of this semi-urban center have not yet been harnessed effectively. This area is also a habitat for elephants, African wild ass, antelopes and others.

Since its master plan has been finalized this semi-urban center would become among the fast urbanizing centers of the country. The implementation of electric supply would also accelerate the journey towards a speedy development.

Bademit Dam which has been constructed in Omhajer semi-urban center would make due contribution in improving the living standards of around 4,000 people who have been resettled in the area. These around 4,000 inhabitants are expected to conduct agricultural activities through utilizing water resources the dam impounds.