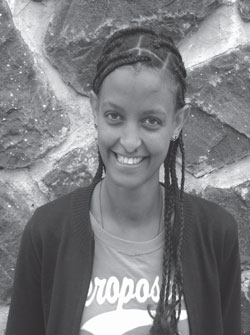 Her name is Winta Yebiyo. She was born in Asmara, Gejeret area, in 1988. She studied her Elementary and junior school in Amanuel Elementary and junior school, and High school in Keyh Bahri secondary school.  After she successfully completed her 12th grade in Sawa, she joined the Eritrean Institute of Technology and studied Computer Engineering there. Haddas Eritrea Newspaper has conducted a brief interview with Winta. Excerpt follows:

Could you please tell us your background?

I spend my childhood times at Gejeret. When I was a child I used to ask questions, even if a guest comes to our house I used to refuse to go out of the house so as to eavesdrop on what they talk about.

As I told you before I continued asking questions until I became 4 years old, and then I started pre-school at Fred Hollows Kindergarten. I didn’t stop my behavior of asking even there, at Fred Hollows; instead I became member of the cultural troop there and became a good participant in drama plays and poems.  After that I took my elementary and junior education in Amanuel Elementary and junior school.

Can you please tell us about the life you spent at Elementary and Junior?

When I started my first grade lesson, my older brother started to assist me over, in my studies as well as other activities. That time I was programmed and have a fixed study and break time. According to that, I stood first at grade one. However, I stood 8th rank in grade two because I started to spend much of my time playing with children of my age, leaving the study program set by my brother aside.

And then, starting from grade three I returned back to my old habits which helped me to stood first starting from grade 3 to grade 7. There were also times that I became one of the best three students at a school level. Then I had to study hard for my General Examination under the accommodation of my brother.

What was your General National Examination result?

I scored 93%. Actually I wasn’t satisfied enough though I did not worry.  Then I joined Keyh Bahri Secondary School for my high school education. At Keyh Bahri Secondary School, I was influenced by some behavioral changes like any other high school students; you know the “fair age thing”. However, the base I had from my home did not easily fade out, it couldn’t shake off completely, the determination was always there.

How was your result at Keyh Bahri secondary school?

It was great, thanks to my brother’s great effort. Besides my teacher, Berhanawi Tekle asked me if I would like to take an extra tutorial class at his private school for free, taking my good results in to consideration, and of course I accepted his offer happily. As a consequence, I completed my high school education standing first from my class and second or third prize at a school level, except that I stood second from my class, at grade 10. Side by side I was making a good preparation for the matriculation examination.

What kind of preparation?

While we were taking our 11th grade education, we, the classmates, established one group; i.e. those who cared about education, so as to help with each other. Our group which started with 12 people then increased to 60. Because the school administration gave us one class room in which we could study and discuss, it helped us to create a good spirit of assistance and helping each other. Therefore, I wasn’t afraid of the matriculation exam ahead waiting for me; I was just eagerly waiting to go to Sawa and come back scoring a good result, so as to take further education.

What were you expecting to score in your matriculation examination?  And how did it go?

The one who works hard would finally become successful. I believed that I would score 4, if I tried my level best.  Because where ever I saw the winners of Zagre, there was always a strange feeling created inside me that I can’t express now, just like a feeling of unreachable dream that your heart always knows that this dream will come true one day. Life in Sawa was good leaving the hot weather of Sawa aside.  The matriculation result was less than my expectation that I scored 3.6.

Which department did you choose then? Did you have a particular field you dreamt to study before?

Well, I couldn’t say that I exactly wanted to study this and that. I couldn’t even easily choose the department because I just thought that all the departments are good. Nevertheless, after I discussed about it with my brother I decided to choose a department that can help me create and innovate something.

How do you explain educational and social aspects in college related to your studies?

It’s obvious to face some difficulties, to become inactive while starting a new life, and I encountered with those challenges as I started the new college life. But after some weeks as I started to adjust with it, it became normal.

The freshman lessons seem simple and familiar with the lessons we had taken at high school. I promoted to second year getting 3.7 GPA, thanks to my brother’s commendable advices.

First year we only chose college as a whole, and we had to choose a particular department from all the departments in that college. And I decided to choose the Department of Computer Engineering.

What uniqueness did you see to choose department of Computer Engineering?

As I aforementioned, I had a dream of inventing and discovering new things, so I had to select this department to make my dream come true.

What about second and third years?

What about fourth year and fifth year?

At fourth year we made a min project, which means we studied the theoretical lessons we took in the past three years practically, which is fascinating, and I got 3.56. Since fifth year is the final year, you studied your lessons

filling with lots of hopes and expectations. I don’t know about others but for me it was the most precious year and it’s the time that we started our project “GRAMMAR AND SPELLING CHECKING”.

What reasons do you have about the project, except thinking it as a project made for the evaluation of your studies?

The main motive of the project is to function in Tigrina literature. It is meant to be used as a modification device of the mistakes and errors of Geez word usage and grammar. The five people of my group and me took the Project to Sawa at the Fifth Eri-youth Festival and became prize winners.

Well, in fifth year it is this project that we pay a great attention. After I got a 3.87 GPA, calculating the sum of all grades of the previous four years, I graduated with grand GPA 3.62, i.e. GREAT DISTINCTION, in July 7, 2012.

This year, you were the only girl from the College of Engineering who graduated with high result, i.e. Great Distinction, what do you think is the secret of educational success?

Success is won in inches not in miles, you can yield a little now, and then a little more. “Today’s Practice is Tomorrow’s Victory”. There is a need of hard work to become a successful person, and to spend a successful educational life. The ultimate success comes from the internal satisfaction of knowing that you have done your very best.