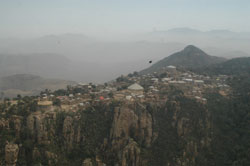 Debre Bizen monastery is one of the historical heritages in Eritrea that is excluded only for male to visit during its annual celebrations. No female is allowed for entry. Women have been warned, more than seven centuries ago never ever to set foot on that sacred tip of a mountain. Climbing up to the sacred monastery, by any female would be considered as a gross transgression to the sacred sanction and will be dealt with seriously way back in time. Thus any person, specially the male pilgrims, would imagine that if any female would dare to climb up to that monastery, she will be shrouded by a mysterious whirlwind, thrust to the skies and poof she will be catapulted down to Nefasit. It could be fatal of course unless the Heavens will arrange a safe landing. So the legend goes

In reality it would be quite mind-blowing why and how the founding father, Abune Philipos, chose that remote area, seemingly an impenetrable dense forest, and, as it is said, the then full of wild animals, and in that remote ripple of time. And why were women not allowed to enter the monastery.

In contemporary thinking the reality of not allowing women to take pilgrimage in the monastery might look unrealistic. Yet legend has to be honored and to this day no lady has ever attempted of ever daring to climb up to the Monastery. However at the foot of the mountain several female believers ask their male counter parts to take donations on their behalf, to the monastery and see them off with their blessings and ululations.

The male youth of the yesteryears, mainly the Asmarinos, use to swear in the name of the cherished Abune Philipos. He is such an adored saint that most of the male youth will trek to the famous Debre Bizen in droves. Most of the silver haired men in contemporary Eritrea have a collection of black and white photographs to show while posing by the side of the famous big Iron cross at the entrance of the monastery, when they triumphantly reached there. The Asmarinos would visit the monastery at least for three to four times in their lifetime.

The yearly festivities of Debre Bizen take place on August 11 according to the Gregorian calendar or 5th of August ,according to the Geez Calendar or the Julian calendar as it is known to the outside world. Most of the male pilgrims’ trekked to the mountainous monastery of Debrebizen on the eve, (that is August 10th) for the purpose of presenting themselves at the overnight prayers and the spectacular hymn sings, adored by the beating of drums and sounding of cymbals,  by the Orthodox Tewahdo Church monks in praise of the Almighty.

The male population, the elderly as well as the youth flock to the monastery in thousands. Male Pilgrims visit the monastery even from the remotest area in the country. One monk claimed that as Debre Sina is popularly visited by the female population, so is the Bizen Monastery visited by the male population. Those who come by private cars and even bicycles have to park them in Nefasit, 24 kilometers from Asmara along the Massawa road as obviously there is no comfortable route for vehicles. Thus starts the arduous journey for one has to climb the 825 meters high to Debre Bizen Monastery, above Nefasit. The trek is a climb of about 7 kilometers through a hairpin jagged route. As such one will be completely dehydrated unless one will have to carry a bottle of water to replace the loss of excessive sweat. It is a journey where one will test oneself whether one has the steadfastness for such a tough expedition. While treading one will overhear, while overtaking or being overtaken by some group “Oh you know I am slowing ever since the hemorrhage operation I performed some years ago. Another one will express, “you know how fast I was but now I have some strain on my leg”.  The excuses are many.

What is interesting however is that all along the way everyone will come out to help and will motivate any pilgrim who is seemingly drained. It appears that some have already bet as who is to reach the peak first. Others will marvel at the feat of the elderly to climb the mountain. “Hey you are still strong and young” will one exclaim sarcastically. It is quite amazing to see most of the youth trekking on foot round trip, all the way from Asmara to the pinnacle of Debre Bizen. They roughly cover a distance of about 60 kilometers. You know, one said, these youth, are the products of Sawa, they are simply persistent. Others have made it riding on bicycles.

All or most of the pilgrims travel with some gifts of umbrellas, candles, money and any pledge they have promised the year before. The scene is quite spectacular to see such huge gathering of the pilgrims.

The religious ritual commences at 10:00 a.m. with the monks and visiting clergy primarily honoring the escort of the Ark of the Covenant, which contains the tablets of the Ten Commandments. The visiting pilgrims also follow

the trails in profound respect. The Ark carried on the head of one monk under the shade of an umbrella, hoisted by another monk, goes round the church three times. Such ritual is complemented by the monks melodious songs and rhythmic dances supported by beating of the big drums and their sounding cymbals, in praise of the Lord God. All traditional Orthodox Tewahdo Churches are architecturally spherical. The celebrations of the Holy feast were held at an open space in the presence of all the visiting pilgrims. A benediction is given by the highest representative clergy of the Orthodox Church. A history of the life of Abune Philipos is also recounted. The celebrations are colorful and inspirational. It can be said that all the pilgrims vowed, mostly with pledges to bring with them some gifts, when returning next year. The clergy wished every one health, peace and prosperity and wanted everyone to see them back next year.

Meanwhile the revered monks of the monastery have already had prepared the local beer, the suwa, and also some provisions for the visiting pilgrims to drink and eat. It is a yearly generous offer. Some pilgrims even take suwa away with them in bottles. It is considered as a holy drink. In addition those who can afford would return with some artifacts from the smallest wooden or iron cross artifacts to big wooden cross, and crosses made from beads, pictures of saints, the Psalms wrapped in skin cover, and various gift articles offered by the monks for sale. It is a good system of earning some money for keeping up the monastery sustainable.

At the conclusion of the colorful ceremonious religious festival, the pilgrims immediately give their back to the monastery and start to descend the 825 meters, the seven kilometers walk, to Nefaist. Unlike ascending which requires more physical efforts in pushing up forward, the descending has more inclined propulsion downward.

The natural kinetic energy will simply have a sloping drive downward at an added speed. The problem however is that one has to make countless breaks not to be hurled down the slope, thus causing the knee and the legs to ache. It is said to be advisable to hold a walking stick especially for the elderly.

The Debre Bizen Monastery is one of the treasures of the country’s spectacular tourist attraction. The visitor can see the old church and the residential houses of the monks made in a traditional feat of engineering. There are also various sepulchers which preserve the corpses of the saintly hermits.

Without tampering with the traditional engineering architecture, more efforts can be done to help the monastery to make the church and the residential houses more acoustic. Similarly the path from Nefasit to the peak of Debre Bizen can be paved in a way that can provide some comfort to the pilgrims.

For centuries, Abune Philipos has remained an icon of a Saint of the Eritrean youth and his monastery, the famous Debre Bizen will remain a respected place for pilgrimage worth visiting for many millenniums to come.