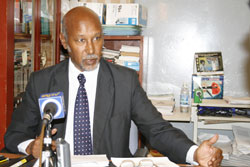 The Ministry of Education said that 70% of students who sat for General Examination 2012 have passed.

Asmara, 23 August 2012 – The Ministry of Education said that 70% of students who sat for General Examination 2012 have passed.

Mr. Kifle Mekonen, Head of the department for national examinations in the Ministry, indicated that the examination was conducted in many stations nationwide, including those for members of the Ministry of Defense, and in community schools in Riyadh and Jeddah, Saudi Arabia. He further explained that the regional Administrations of Anseba and Northern Red Sea have generally registered better results to this end.

Reports indicate that National General Examination 2012 was conducted from 6 to 7 June in 319 stations.