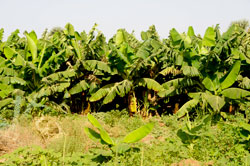 Each rainy season around 25 hectares has been cultivated in Teseney sub-zone and 90% of the inhabitants of this sub-zone have a two-hectare farm plot. Generally, Fanko Talatasher, Setimo, Alighidir and all the ten administrative areas of this sub-zone are agricultural areas. There are also farmers who cultivate large farm areas around rivers banks throughout the year.

Agricultural area of Arbatasher has been cultivated by 24 farmers and including the farmers in Talata-Asher village, 77 farmers have been engaged in farming activities. These farmers conduct agricultural activities through 142 wells and also 142 motor pumps. Almost all farmers of this sub-zone have been mainly confined in vegetables and fruits farming but are now gradually starting to participate in diary production. In this sub-zone there is an association of dairy products and through which all these farmers have been making due contribution in boosting diary production and are also engaging themselves in keeping livestock.

Teseney is the main market place of farm products of agricultural areas around Arbata-Asher and Talata-Asher. However, market places of Teseney have usually been saturated with huge amount of agricultural production that flooded there from different areas of Gash-barka region and the farmers have been selling their farm productions at a very nominal price with equals not with the energy they exerted and the huge expenses they made. At times, as an alternative, they sell such production in the markets of Asmara. It is certain that if they start to export agricultural productions, the farmers in the sub-zone would become beneficiaries in a way that compensates their toils and moils.

According to Mr. Idris Ahmed Siraj, head of Agriculture ministry’s Branch office in Teseney sub-zone, the newly founded association of farmers that embraces all farmers in the Gash-Barka region would help them to address the

challenges of marketability. Bearing in mind that farmers in the sub-zone and generally farmers though out the country may face difficulties due to the rising costs of oil; the Government is assisting them through providing them with subsidized fuel supply. Through conducting studies the Ministry of Agriculture tries to ensure that every farmer is obtaining sufficient supply of oil as per the vastness of the farm area.

Since much of the agricultural area is situated around the banks of Gash River, agricultural areas of Teseney sub-zone do not have deficit of water supply. However, if the farmers around this area continue to consume huge amount of water, the underground water resources of that area would gradually be degraded. To mitigate this, Mr. Idris said “We are pushing the farmers to judiciously utilize water resources and we are also looking for the introduction of drip irrigation based farm practices.”

As there was deficit of rainfall in the last two summers, the sub-zone has started to cultivate green animal feed. Hence, alfalfa has been widely cultivated through irrigation. Alighidir has much of this sub-zone’s livestock resource. The inhabitants of the Teseney sub-zone are now starting to store animal feed that could sustain them to the coming rainy season. Such initiatives of the inhabitants would indeed increase the number of livestock which has mainly been confined in Alighidir.

The major challenge farmers in Teseney such-zone have been facing is due to a plant locally named “Termri-Mussa.” This sort of plant absorbers huge amount of water and since its roots penetrate deep and stretch to a vast area of water resources,  other plantations would be endangered due to lack of sufficient water. Thus, measures have been taken to cut down such trees to be used as biological fuel. All in all, Teseney sub-zone is among the richest agricultural areas of Gash-barka region and is of course a land of opportunities.

Anseba region: Inhabitants called upon to play due role in preservation of historical sites