I found my dream from replication 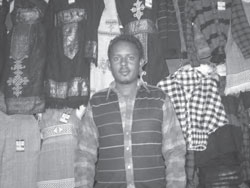 His name is Abdurahman Dawud. He was born in Keren in 1979. He took his academic education in ETHIOPIA, Asmara and Elebered. When he reached grade 11 he quit learning and shouldered the responsibility of attending his family and was engaged in the profession of weaving. Haddas Eritrea has conducted an interview with him and excerpts of the interview follow.

Could you introduce yourself to us?

My name is Abdurahman Dawud. I was born in Keren in 1979 and grew up in Ethiopia.

How was your early childhood?

When did you quit learning?

I learned till grade 11. I was very serious in my education and I was very competitive.

How did you start weaving?

When I was a kid I used to see people weaving and because I was regularly visiting them I got interest in the profession. There was a man by the name Beshir in Geza Birhanu, Asmara. I went straight to him and asked me to give me the chance to work with him. He didn’t refuse and told me that he would give me the chance and see what I could do.

How did you manage then?

I had the interest. And I took the courage to do my best. And with knowledge I had through observation I managed the job.

I didn’t stay there for long and rented a house and started to become self employed. I started my own business in Geza Kenisha.

Did you have the dream of becoming a weaver?

That needs patience. If you have patience and will you could do everything you want to do. What you need is to start simple with not too much ambition. The second thing is to know the secret of the profession.

What is the basic thing you should understand to become good weaver?

You should understand first of all on how the weaving machine works. With time I replicated some parts of the machine for easy work. For example I introduced part of a bicycle into the machine so that the machine could be easily maneuvered and with that I was able to easily do my job without difficulty of looking for spare parts.

Do you have demand for your products?

The traditional cloths I produce are of special quality and they have big demand from the public. I have a special cloth made of the Eritrean flag. That cloth has demand not only from Eritreans living inside the country but also Eritrean women from the Diaspora. I also produce cloths for fashion show. For example I participated at the Sawa fashion show in 2006. And the result was promising.

Could we say Abdurahman is cultural cloths designer?

I don’t take myself that far. I am still growing to become one of the best weavers.

Any thing you want to say?

We should try and work hard to develop our traditional cloths and make them internationally known. We have also to dream to compete with those international cloth designers for that could be a tourist attraction in its own right. No one should say I did enough but work hard to introduce new things without deviating from the origin.

The concept of a nation