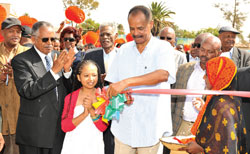 President Isaias Afwerki today opened the Festival in the Central region which would last until September 2.

Asmara, 25 August 2012 – President Isaias Afwerki today opened the Festival in the Central region which would last until September 2.

Speaking at the opening ceremony which was conducted in the presence of Ministers, Regional Administrators, government and PFDJ officials, as well as invited guests and regional inhabitants, Mr. Kahsai Gebrehiwet, Administrator of the Central region, said that such an event is a basis for depicting national values vis-à-vis the cultural diversity. Commending the role of government institutions, EDF members and the inhabitants in organizing the Festival, he noted that anti-Eritrea quarters have been challenged by the prevailing harmony among the Eritrean people and the strong bond between them and the leadership.

The President made a tour of camps portraying lifestyle patterns of the region, the sub-zonal activities and local products.

23 production and 7 mining companies are taking part in the Festival, while 40 service businesses are rendering commendable service.

Meanwhile, the participants of the Festival said that it has adequately depicted overall activities in the region and the lifestyle of the people.

Mr. Mahmoud Idris, Sudanese, and Ms. Adhanet Zerai, Eritrean national residing in the US, Mr. Alem Gebreab, and Ms. Meryem Adem voiced satisfaction with taking part in the event, and expressed appreciation for various artistic works and the way the lifestyle of the inhabitants has been depicted.

Moreover, children residing inside the country and abroad expressed deep impression for the camp-based multi-colored exposure.