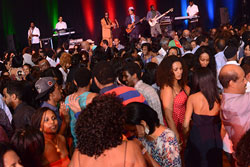 The Eritrean community in Washington conducted festival from 17 to 19 August with patriotic zeal in which Eritreans from different cities in the US and friends of Eritrea attended.

Asmara, 26 August 2012- The Eritrean community in Washington conducted festival from 17 to 19 August with patriotic zeal in which Eritreans from different cities in the US and friends of Eritrea attended.

The festival that was conducted for three days in Washington featured a number of activities including seminars regarding the current situation in the Homeland and the world, sports activities and cultural shows.

During the festival seminars were conducted by Eritrean professionals on “War, Information and the Western Media Outlets”, “The Secrete of the Eritrean People’s Power”, as well as the power of the pen in the national resistance.

In a seminar he conducted with the participants of the festival, Mr. Araya Desta, Ambasador of Eritrea in the UN, gave extensive briefings as regards the nation’s progress and the people’s steadfastness against external conspiracies. He also said that anti-Eritrea agendas would result in utter failure thanks to the people’s readiness to mount staunch resistance against such agendas and called on participants to invest in the country.

The Ambassador who expressed that festivals have a special place in the history of the Eritrean struggle and that every year the number of participants is increasing especially that of the youth.

Efforts to nurture citizens equipped with all rounded knowledge being witnessed, visitors of the Festival express