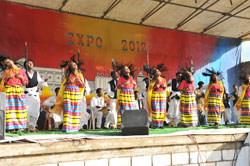 Aside from the smooth rain, the exquisite beles, Eritrean people coming from all over the world and Sawa’s youth festival, the most anticipated event by all the generation it’s the Eritrean festival. This festival provides entertainment for nine ethnic groups and for people of all age. It holds exhibitions of the Eritrean tradition, it’s people and the colorful union of the Eritrean people altogether. As a well-known Eritrean artist, Wedi Tikabo, says our people are like “tishiate dimsi ab hanti kinit” which means “nine beats in one melody”. This statement might seem superficial but it has a very strong and deep meaning: we may be of different ethnics and have a lot of difference among us starting from the languages, uses, traditions and beliefs yet again we are and always will be strongly united as one. A reminder of this is the Eritrean festival.

Differently from the other festivals held before by Eritreans, the one in Asmara apart from all the entertainment it has a cultural purpose since the young people get to gain more knowledge of the traditions that due to the actual technological advancements we may experience lack of them but they still survive in the courts of Expo.

President Isaias Afwerki opened the Festival of the Central region on the 25th of August 2012 and made a tour to camps portraying lifestyle patterns of the region, the sub-zonal activities and local products, which would last until September 2 for ten days, and people from every part of the country and outside come to share the joy of this moment. It’s probably one of the most beautiful sites ever… countless people from everywhere and of all ages celebrating as one. It’s a big opportunity for the Eritrean people to have a “get together”.

21 years ago, during the Derg regime, the expo ground was used as a prison where Eritreans used to be tortured and killed. It’s amazing how a place in which tears and blood of innocent folks used to shade in yarning of a better and free homeland, is now a place in which our society is rejoicing the liberty of being free in a country of its own sovereignty.

Currently, Expo is offering a lot. Calisthenics performances were presented by students and workers in addition music and comedy shows are being hosted at the quarters of the Expo grounds. Along with that we have

Adding color to it is the educational pavilion that embraces the various collage activities as well as the educational performances of the seven sub zones of the central region. Parallel to it is the sections made to make our children happy, where they get a chance to not only have fun playing while making new friends but also harvest a great deal of knowledge.

Capturing the attention of many people are the expositions of historical events and places and sites of the central region including displays of our Asmara’s beautiful Art Deco.

Last but not least is the shopping platform, at this moment there is even a bigger than ever market area, where you can get items of any kind.

It’s been almost seven days and we all know that it is about the end but still people can never get enough of the delight of the compound. In fact people from all gaits of life are rushing to the parklands of Expo… mothers, fathers and children with their cotton candy and ice creams, youngsters dancing and singing in the thoroughfares. There are also refreshment cafes in all corners of the compound to relax and to take a break after visiting the expo lands.

Being the first regional festival ever people were actually anxious about it, but come to think of it we are really enjoying it. I personally think that is truly an amazing opportunity for the Eritrean people to integrate more as we’ll get to visit each other. I definitely see in the future many more regional festivals. Asmara might have been the first one to host a festival of a kind but people from all the regions came to visit and eventually this will strengthen our unity as a people.

September 1: The day that witnessed the declaration of Eritrean revolution

Immergence of nations in developing societies