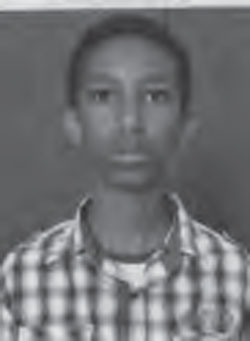 His name is Rezene Tsehaye. He is a 14 year old student. Yet, his childish voice didn’t change.  Even though he is long enough, he is still a child. He likes listening more than talking, and joined Alliance France kindergarten at 3. After three months, he transferred to Finland Mission Elementary School to take his grade one lessons. The director of the school was bewildered by the child’s appearance, for he was a child who didn’t reach 4, yet. Anyway, Rezene started his grade one studies there.

When he promoted to grade two at the age of 4, the school administrator told his parents to rest their child for the coming year, so that he wouldn’t disturb the other students, for he was too young. Then, when he studied his third and fourth grade lessons, he jumped to grade six without taking his grade five studies. At grade 8, the time he had taken his General National Examination, he joined Dembe Sembel Secondary School with a score of 88.5, to attend his high school studies. Rezene didn’t go to Sawa to complete his 12 grade because he was only 13 years old; instead he joined Asmara Snekinet Technical School to attend his 12 grade lessons, and got a perfect score in his Matriculation Exam. Hadass Eritrea Newspaper has conducted a brief interview with this outstanding student. Excerpt of the Interview follows.

Could you please tell us your condition at Elementary school?

I wasn’t interested in grades, but the best thing that leads me to success was that I used to focus on what the instructor says in class. I was curious enough to grasp what the teacher says and I won’t go out of class without understanding it and asking unclear points was my habit.

How was your ranking level?

Actually, I don’t want to remember it, but I was not that much appreciative. As I told you I was so young that my level of education didn’t much with my age, so I was not interested in grades until I reached grade 11. That time, at grade 11 I was only 13 and I was not allowed to go to Sawa to complete my 12 grade studies, so I continued 12 grade lessons at Asmara Snekinet Technical School.

How many subjects did you take at your Matriculation Exam?

I took 7 subjects: English, Mathematics, Physics, Biology, Chemistry, General Science and General knowledge, and I got an A in all subjects.

How were you prepared for the examination?

I started to study three months before the examination date. And there was no Biology class at Snekinet, so I had to make self-preparations. I also took tutorial classes.  As I aforementioned, I was not that much good in

studies, I was just paying full attention to what the teacher says at class, but when I joined Snekinet, and that I know the examination date is no more far to come, I started to study hard, even at night. However, I could practically learn that such kind of study technique is too tough.

How was the exam then?

I found it easy. The answer of every question simply appeared in mind that I could answer it without any problem.

Did you have expectations of getting 4, Full Mark?

Taking the content of the examination in to consideration, I was deadly sure for my success.

Did you happen to find a student of your age in this situation as yours?

Never! I was the youngest student to the end. I couldn’t even remember someone who was a year older than me, let alone to find younger.

What did you feel then?

Especially at elementary, the students used to laugh at me, but everything faded up through time. But this feeling was nothing to me, for I was a little child.

How about on the teachers side?

At first, they used to repetitively ask my age, especially the time I jumped from grade four to grade six; I was only 8 years old. And I could remember that they were all encouraging.

Could you please tell us you parent’s role towards your success?

As every parent do, they used to help and motivate me, they even used to buy different books, and my father started to watch me over that he learned the Matriculation exam was no longer to stay, because he knew that I was not interested in studying.

How did you know your Matriculation exam result? Did you know it by yourself or you heard it from others?

Well, my father phoned me while I was at my friend’s house when he saw my result at the Ministry of Education.

How was your feeling?

I think it is because I am still a child, I didn’t feel a strange feeling. I just thought that it is a result that anyone can get. I even get surprised hearing people to admire me, taking my age in to consideration because the result I got didn’t seem exceptional to me except taking it as ordinary mark that so many students could get.

Well, my plan is to join Eritrean Institute of Technology and study the field of Computer Science there.

How do you choose the field of Computer Science?

I am interested in computer because I grew up with it.

What did you do with it? I mean with computer?

I could do so many things with computer; like programing, Photoshop. I used to practice graphics, but now leaving all aside, I am trying to focus on 3D films and others.

What do you say about the perfect score you get vis-à-vis your age?

Probably, I would be more satisfied and my feeling would be different, had it been at the ordinary age.

As you mentioned above, you are joining the EIT, how are you prepared for it?

Now I will join college, and it is going to be my first experience. Because the other students are already experienced, they are accustomed with social life while they were taking their education in Sawa.  So my parents and

friends always tell me to be mentally and psychologically ready.

Let’s start seeking in the past