Let’s start seeking in the past 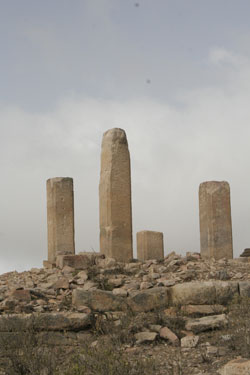 A nation’s identity is always found in the hidden shadows of the past. The past embraces the true colors and the routs of the traditions and entities. As for Eritrea most of these things have been put aside due to different political or social situations.

Some paleontological studies indicate that Eritrean region was the cradle of mankind. Much of Eritrean history, however, has not been recorded. A lot of invaluable archeological sites have been identified in the country while many more potential but equally important sites are expected to be uncovered in the course of time. Archeological studies in Eritrea indeed are quite indispensable together with oral traditions to fill the gaps of what history has recorded so far.

So far substantial historical and ancient heritages have been identified and documented. These include Buya, where one million old hominid fossils were recently found. Others that talk about the ancient society of Qohaito, or the mythical port of Adulis which during the Greco-roman period was one of the prominent international ports where the international trade routes converged and diverged, the ancient sites of Der’a-Hawatsu, sites of Metera, or the ones of Dekemhare. Going to the western lowlands we can find the sites of Bisha, Dahlak archipelago and the Church of Kidane Mihret in Senafe and so many more that have been ignored globally until recently.

The archeological sites of Eritrea hold a rich and unparalleled cultural heritage covering practically all segments of human history.

Eritrea is incredibly endowed with the surviving traces of most precious inheritance of human achievements. Unfortunately, like many other nations that had been under colonial and cultura

l domination, Eritrea’s past also remains un-presented. After independence however, efforts have been exerted in the fields of documentation, excavation, restoration, promotion and interpretation of the nation’s diversified cultural resources. And it is believed that the efforts would enhance the harvest and communicate to the people the mystery of the past, thereby making even stronger the sense of national pride.

As Eritreans we feel pride and honor that we are participating in this moderate attempt and this could be seen as the first endeavor at the reconstruction of Eritrea’s poorly represented ancient history.

The Shabait Erina forum would present consecutive articles regarding the historical and ancient sites and heritages. The coming article would deal with the about 950 historical sites in Qohaito and look at them one by one.

Quohaito is a pre-Aksumite city located over 2500 meters above sea level in Debub region around the city of Adi Keih.