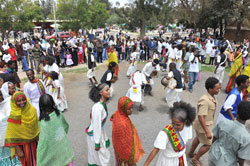 This year’s festival has been planned to be conducted at a regional level and the central region has pioneered the hosting of such a festive event. Timeless songs that describe Asmara’s beauty echoed to all directions of Cinema Roma. The songs that describe the beauty, cleanliness of the city and about the unity of indigenous Eritreans in some areas of Asmara such as like Abashawl that were entirely inhabited only by Eritreans stimulated nostalgic feelings on those who were enjoying it inside the Cinema and on those who were watching it Live on Eri-TV. Musical drams and other songs were also staged just to signal the opening of Expo 2012 that would stay open for consecutive days from August 22 to September 2.

Pavilions of education, health, mining companies, and pavilions of children and of invention and renovation, cultural shows, display of industrial products among others are still presented in Expo grounds. These shows have been common in all festivals held since 1992. This year’s festival has, however, uniquely presented some representative items of the struggle for independence. Hence, expo 2012 has in a section reserved to showcase some of the bitterness of the struggle for independence uniquely staged, the atrocities of colonizer, daily livelihood of freedom fighters and challenges they used to encounter. All these are represented through real objects such as utensils that were used in the battle fields, varied types of riffles and artilleries as well as pictorial exhibitions that depict daily activities of freedom fighters- ranging from routine activities all the way to their martyrdom are particularly represented in Expo grounds. Food staffs one may look them in disgust were daily rations of the freedom fighters.

The freedom fighters were using some vegetation as cleanliness ingredients for it was the only thing they could found in areas around them. Expo of the central region thus is staging a few representations of the vast historic

deeds, hurdles, determinations, moral obligations and complacence of the freedom fighters with what they have at hand.  All the items staged there clearly depict how bitter life in the battle fields was. Let alone to be part of that bitter life, such experiences of the fighters touches ones conscience and strikes all sensations even as an observer.

There are also educational materials like flat stones that served as blackboards, tattered garments; combs among others are also staged there in the Expo grounds. Observing such items, one may guess how difficult was to be in the battle fields and could not feel at ease not only to wear them as garments but could not tolerate to see the ugly view of such clothes if used as costumes in a role play.

Everything staged in the pavilion of the struggle for independence has become among the impressive shows of Expo 2012. Items that vividly portray creative talents of freedom fighters and some written documents also are giving an observer a diversified view of the livelihood of freedom fighters.

Expo of the Central region which has so far been visited by a number of people and everything present there would continue to grab attention of every visitor.