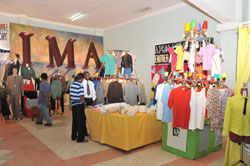 A number of participants of the Central region Festival indicated that the exhibition staged by production companies has adequately depicted investment opportunities in the country.

Asmara, 1 September 2012 – A number of participants of the Central region Festival indicated that the exhibition staged by production companies has adequately depicted investment opportunities in the country.

Among the participants, Mr. Kiflemariam Gebremariam, Ms. Fatina Seid and Mr. Beyene Ogbagabir voiced conviction that the fair attests to the endeavors exerted by the government and the people aimed at promoting economic development, and that the recent Eritrean Investment Conference is a stepping stone to further accomplishment in the sector.

Indicating that they have been exporting 80% of their products comprising leather and plastic shoes to various countries in Europe, Africa and the Middle East, Musie Asfaha from Keih Bahri Tannery disclosed that the factory recently extended its production line.

Mr. Tewolde Mamo from Keih-Bahri Soap Factory and Mr. Biniam Fisehaye from Bereket Fruits Cannery said that the festival is vital in obtaining feedback from potential customers, and that they are exerting efforts to attain brands introduced in international markets.

Mr. Gebregziabher Eyasu, a florist from Asmara Flowers, said that the business is in a position to export 40,000 flowers weekly along with strawberry and apple. He also explained that the volume of export would more than double in line with expanding the company’s land capital, and lauded the favorable business environment being created by the Government.

STATEMENT OF THE ERITREAN PEOPLE’S FRONT FOR DEMOCRACY AND JUSTICE On the occasion of September 1, 2012