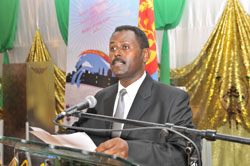 The Central region festival 2012 that was conducted from 25 August under the theme “Our Step to Sustainable Development” concluded today, 2 September.

Asmara, 2 September 2012- The Central region festival 2012 that was conducted from 25 August under the theme “Our Step to Sustainable Development” concluded today, 2 September.

Speaking at the closing ceremony, Mr. Indrias Asmerom, Secretary of the Holidays Coordinating Committee in the region, underlined that the Central region festival 2012 was conducted at the Expo grounds following the footsteps of the National Festival and that has added color to the national holidays. He further said that the secret of the success of the regional festival was the full participation of citizens.

During the occasion awards were handed over to winners in invention and innovation, oration, painting, sculpture, handicraft, as well as to music troupes, education pavilion, different administrative villages, exhibitions and traditional dances and music.

At the festival which was conducted for the first time by the Central region, 23 factories and institutions and 7 mining companies presented their products. Likewise, 40 service providing institutions participated in providing service to visitors while all sub-zones of the region presented items depicting the life style, tradition and culture of their respective inhabitants.