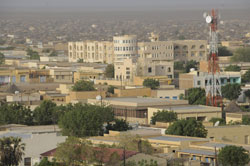 The residents of Tesenei city said that expanding business activities there have created new job opportunities.

Among the residents of the city, Mr. Abraham Asfaha, Mr. Omar Osman and Mr. Afwerki Abraham explained that trade activity between Tesenei and the Sudan is historical, and that Tesenei is witnessing growing momentum as regards small scale and big business activities, including the ones service-bound.

Stating that service businesses have also flourished in line with the increasing mobility of people to and fro the city, Mr. Gebremichael Mengisteab, head of development department in the Administration of Tesenei city, stated that the Administration has been strengthening its regulatory role to this end.

Reports indicated that Tesenei city where less than 1,000 people lived 20 years ago has presently more than 80,000 residents.