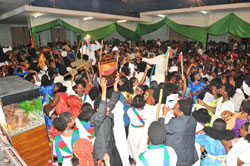 In the morning hours of 2nd September 2012, Yatana cultural group of Godiaf administrative area staged splendid dance and music show in the Expo grounds. The music show was solely traditional.  Smiling faces of male and female dancers who were presenting the roots of tradition in a very attractive manner was the very reason for the flocking of a number of people towards the performance stage. Hair bradding styles, live drum beats; beautifully designed dancing garments of the female dancers -their waists girded with multi-colored robs, also wearing ornaments such as  necklaces, anklets and some beautifully woven beads on their forehead, the male dancers wearing shorts and T-shirts, tying  white scarfs on their foreheads just made a very pleasing view. The male and female dancers flatter one another in a very romantic and subtle way which avoids the staleness of commonly used words. The male dancers appreciate their sons and the female dancers do the same in appreciating their daughters. This was a small portion of the diversified cultural shows that were presented in Expo 2012. Such a beauty was however to be closed in the evening hours of that very day of 2nd September.

A number of people gathered in Expo hall to be part of the closing ceremony of Expo 2012. All the sub-zones of central region and administrative areas of Asmara which have been the very beauty of the festival gathered and took their seats. But, no one could wait sitting in silence. Thus, the cultural groups started to beat drums, chanted varied songs, whistling sounds filled all corners of the hall. The happiness and cheerfulness of the cultural groups entertained the audience. There was much eagerness on the part of every sub-zone and administrative area of the central region to be awarded as winners of the overall competitions in different disciplines.

It was time for the beginning of the closing ceremony. A traditional song in Hidareb language accompanied by dancers who swayed swords and twisted their waists commenced the ceremony. Another singer approached the stage and a large number of choruses stood from their seats to accompany this traditional song in Tigrigna through singing and clapping. The power of the music performances staged in the closing ceremony just made hearts of the participants to bounce in joy. Next to the songs in Hidaerb and Tigrigna songs by administrative areas of Maitemeni and Gejeret respectively, the coordinating committee of the Expo 2012 disclosed the results of its assessment.

that were held at a national level. Mr. Indrias Asmerom, Secretary of the Holidays Coordinating Committee in the region said that every administrative area was committed to hold a successful festival. Hence, Asmara and the entire central region were represented in their entirety starting from Medeber-the very center of invention and renovation, including industrial products and life styles of the inhabitants of the region to the very fascinating art deco buildings.

Members of Aser Music group also approached the stage with a song that highlighted the very meaning of holding festivals. Some content of that song describe Expo as a platform that has a power to portray the overall view of the nation and a center where everybody learns that much has been achieved through pragmatic endeavors. All the songs staged at the closing ceremony rocked the audience who were eager to know which sub-zone and administrative area would become first winner of Expo 2012.

The closing ceremony was a colorful combination which created a nice view which prompted any viewer to stay tuned.  All the beauty and attraction is in Expo and as such it would continue in this very place in the future.
Hearts of the participants and more noticeably of some member of the sub-zones and administrative areas of the central region who staged varied shows in Expo grounds for 10 consecutive days start to beat fast. Who would become the winner of Expo 2012 was their main concern. And it was time; a summarized report of the overall presentation and competitions held in varied fields was presented to the audience by the committee of Expo 2012.

According to the summarized report, generally the contents presented in the festival were assessed as very successful. The pavilion of education which presented creative and innovative items and other artistic works that include a total number of 103 painting and sculpture works, and live painting competition indeed showed commendable achievement of the students who took part in this festival.

Exhibitions of all sub-zones and administrative areas of the region which included audio-lingual presentations and particularly the construction of traditional houses were appreciated by the assessment committee of the festival. The cultural shows staged by all sub-zones and administrative areas were beyond the expectation of the regional committee of Expo 2012.

At the occasion the sub-zones of Galanefhi, Berik, and Serejeca and the administrative areas of Idaga-Hamus, Maitemenai, Gezabanda, Gejeret, Godaief, Sembel, Tirabolo and Arbate-Asmara received awards. Certificates of appreciation were also handed over to Ministry of Information, Arag and Sembel wood and metal work firms, to National Union of Eritrean Youths and Students and also to Sudanese Embassy.

The Prospects of Exporting: Looking beyond the Eritrea Investment Conference

I Will Keep On Traveling Encouraging My Self