I Will Keep On Traveling Encouraging My Self 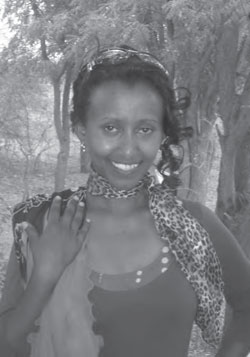 Elizabeth Hagos was born in 1989 in Adis Abeba. She studied there until she reached grade 4. Due to the ill deeds of the Weyane Regime, she and her parents were expelled and came to Eritrea and continued her studies at the schools of Jhon of Kennedy, Dalul and Isaac Tewelde Medhin. After she successfully completed her 12 Grade studies in Sawa, she joined the Hamelmalo College of Agriculture. In Addition to that, Elizabeth activates in Art.  Haddas Eritrea Newspaper has conducted an interview with Elizabeth.  Below is an excerpt of the Interview.

In what sort of art do you concentrate?

I am mostly focused in painting, designing of garments and I also exert efforts in singing, and curving sculpture.

So, let’s start with painting?

I started painting while I was 8th grader.

How do you start painting?

Mr. Asmerom Ghebremariam from NUEYS’   branch office in the central region taught us painting in group.

Could you brief us about some of the courses you attended?

We studied painting for two years and it was really helpful. The instructor was very ingenious. We were a total of 76 students and he was engaged in creating viable working atmosphere. He even succeeded in bringing some behavioral changes among some students. At times, we used to stay for the entire night making practices. He tried his level best to the point of realizing that we are proficient enough in that respective field. Finally, we successfully graduated.

Could you tell us about the paintings you have produced while attending the course?

In an exhibition held at the graduation ceremony I staged a painting of a lady from the Hidareb ethnic group. We have also displayed a number of paintings as a group. We also used to make some works of paintings while

taking the course. There were also some practical field works that enhanced our know- how in different styles of drawing and painting techniques.

What were the developments after the painting class?

I went to Warsay Yikealo Secondary School in Sawa to complete 12th Grade.

What progress did you make in painting while you were in Sawa and afterwards?

I used to offer what I had painted there as a souvenir. I don’t have much of my works with me. Apart from Sawa, I continued it in Hamelmalo but I didn’t make progress as envisaged.

How did you go with sculpture?

Well, I was working hard in curving sculpture. I used to make curves of different styles and make it as a memento. After homecoming from Sawa, I took a course in sculpture in Adulis Junior School; and I displayed sculpture of a young man in the National Eritrean Festival in Expo. However, I didn’t carry on the work of sculpture and the course as well, making a shift to the field that captivates me more. i.e Design.

How do you start designing garments?

As I aforementioned, I started designing since I was a student. I used to décor wedding stages. I also continued it in Sawa consolidating it with singing and painting. I used to entertain my friends by making different styles of designs using mosquito net as a garment. The same goes in Hamelmalo College of Agriculture.

How was your Matriculation examination result?

Although I got the grade that could join me to college, I was not satisfied enough.

What do you think was the cause that your result was unsatisfactory?

I think it was just because my mind was full of the above mentioned Art works.

How did you continue Art in College?

As soon I joined the College I started to work with a program called “Mamet”, a program which focuses more in poem writing.  One student who used to know me in Sawa also asked me to sing, and I started to repeat different songs of different artists.

At the first year, there was a competition among all Colleges of Eritrea. And I heard that there were ladies ready to compete to become models, but there was no one to design their garments meant for the competition. At first I couldn’t find the courage, but finally I designed all the competitors’ garments using a mosquito net.

How did it go then?

As I was not experienced, we didn’t succeed.

The competition continued in second year, and I became a skilled designer. Two people participated from our group at the show and we become the successful designers of the year. And this success helped me to get the opportunity to participate at the Eri-Youth Festival in Sawa in which students from Sawa and the higher educational institutions were participants.

It was hard and excellent. It was tiresome at first, for I had to shape the students competently. They had to practice more like Salsa dance, Catwalk, and in order to do that they had to make aerobics, especially, the students from Sawa. After they finished their military courses, a lot of efforts were needed to fix up their posture. And we become the third rank winners.

Taking painting in to account, I will work hard with design.

What do you mean?

Currently, designing is the field that I give much of my power and time. And painting is playing a vital role towards this field. As I told you I took a two year course in painting, and I wanted to work with it, leaving time aside. I even have already sold two of my paintings to Germany and Sweden. So even though I am not working with it right now, it’s natural to consider it as a work of my interest the same as I do with design.

Back to the old classical rides