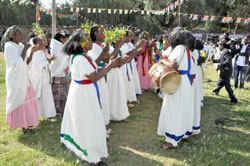 Eritreans celebrated Kidus Yohannes, aka Geez New Year. Over the years I have come across many foreigners who used to get confused about the fact that we celebrated two New Years: one in September and another with the rest of the world in January. So I would explain to them how Eritreans, who officially stuck to the Gregorian calendar (GC), also resorted (usually the elders) to the Julian calendar for traditional and religious holidays and that because of the latter the year begun in the month of September.

The celebration of this New Year dates back decades to the early settlers in the area. Reasons for celebrating this new beginning in September is said to have biblical implications: in the Old Testament, it is believed that the new season after the great floods begun with the month of September.

Similarly in the Eritrean context, especially in the rural areas, September is also the beginning of a sunny weather in which crops are gathered and harvested, after toiling all summer. It’s also during this month that flowers blossom after heavy rains. Therefore, this new beginning is jovially celebrated. During such time, most of the pastoralists that had left with their livestock return home at the beginning of this month.

In the old times, it was also an opportunity for the men to look for a bride and for the women to present their beauty. It is also the time that young boys acknowledge their adulthood because being chosen to leave for the meadows proves a boy’s maturity.

This New Year is generally considered as a fresh beginning and remains to this date the most important of the Eritrean traditional holidays.

The Geez New Year or Kidus Yohannes as it is commonly called, is a religious festival honouring John the Baptist and entails a range of vibrant activities.

The days leading up to the big event, young girls go out in the streets with their little drums singing laudatory songs to passers-by who in return give them some money. That’s more or less like fundraising – only this is at the traditional level. Particularly in the rural Eritrea, the girls, with the money collected, supposedly buy decorations to make themselves more beautiful for the New Year.

At dusk on the eve of the day, the streets are filled with smoke (or its smell) from the burning torches, made of bundles of dry leaves and thick wood sticks that children carry around the neighbourhood chanting “Hoye

Growing as kids, we would get restless until it got dark so we could light our torches and run along the street.

Tradition has it that you lay the burning torch on the ground and make people cross it three times, wishing for blessed and prosperous returns of the day. Once they cross three times, people are supposed to give the children small tips.

After we had made a round in our block and make as many people as we could find cross our torches we would make our way back home, where the family gathers in the compound, and have our grandmother sing traditional songs pertaining to the occasion.

Such traditions make up an important part of the rich Eritrean cultural heritage. Even today, as I listen to the songs on the radio or television, my mind goes back to those smoke-filled evenings that we, as children, would eagerly await.

Watching the television yesterday, the ceremony marking the holiday, live from the town of Senafe, I couldn’t help admiring how the women, young and old, were dressed in their traditional attires and decorated for the occasion, singing different melodious songs: just like what their ancestors used to do during such holidays. Not much has changed in the rituals and the decorations worn by the women, and men for that matter.

I was happy, to say the least, that despite the advancement in technology and civilization our traditional holidays are celebrated in the same manner as it used to be years ago. And this is one of the few things that globalization will never affect.