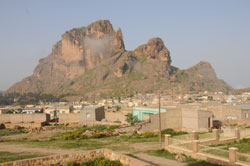 Matara is the name both of a small village and of a supremely Eritrean archeological site, located some 136 kilometers southwest of Asmara, just past Senafe. The archeological site already has yielded evidence of several levels of habitation, including at least two different major cities, covering more than 1000 years. The topmost levels are Aksumite, roughly dating from the fourth to the eighth centuries. This city was allied with or part of the powerful trading empire centered in the capital city, Aksum, to the southwest. It appears that Matara was one of a string of cities along the trade route that ran from Aksum to the port city of Adulis, whose extensive ruins, surveyed but largely not excavated, are in the vicinity of Zula, southeast of Massawa on the Red Sea coast.

One of the more features of the city, until very recently, was a five meters Stele (Obelisk) with an inscription that has been dated to the 3rd century. On the top is an engraved

symbol of a South Arabian divinity. A discover and a crescent. The archaeological site covers about 10 hectares conserved to almost two meters in height.

From the end of the World War to the federation period