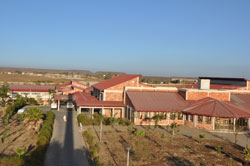 Mendefera Referral Hospital is situated on an area of 14,000 meter square. This hospital took two years, from 2003 to 2005, to be finalized and started to give service in 2006. This hospital has been offering referral service not only as a regional hospital but has also been a national referral hospital for fistula. It also has a center for ophthalmic service. Medefera referral hospital is indeed one of the best hospitals in the country. It gives all-rounded medical service for it has effective and well equipped laboratories and pharmacies and for it offers ultrasound and physiotherapy services for outgoing patients. What is more is that it has maternity, pediatric, and surgical centers as well as a medical ward. How far has this hospital been making progress since its establishment, however, is the concern of every beneficiary?

The referral hospital of the southern region used to have only 70 beds but now it possesses 200 beds. It also used to have only 4 doctors and now it has 14 medical doctors. There was no nurse at degree level but this time there are six degree holders. There were only six nurses but now there are a total of 28 registered nurses. There were only 20 associate nurses and this number has been increased to 62. The radiology department used to have 2 specialists and is now empowered with 2 additional specialists. As regards maternal care, there were only two midwifery specialists but this is also increased to eight. If there was one anesthetist, there are three anesthesia specialists.  The hospital had no surgeon and now it has one. It also used to have one gynecologist and with the coming of additional specialists the gynecological service has been improved in great deal. If there was no ophthalmologist, it started to offer such a service with the coming of a specialist in that field. The number of laboratory technicians has also increased from 4 to 12. There were only two pharmacy technicians whereas today the number of specialists in this field has increased to six and hence there are four pharmacy technicians and two pharmacists.

What makes this hospital different from the other hospitals in the county is that for it has become the only center for fistula treatment. Prior to the construction of this referral hospital there was no fistula center and thus this very center is offering referral fistula treatment service at a national level. However, it is to be noted that in the very beginning all the other departments within the hospital were not fully equipped. For instance, there was no neonatal ICU center in the department of pediatrics. Newborn babies were sent for referral services to Asmara but such challenges are now alleviated with the opening of such ICU service for neonates. The hospital used to have only one operation theatre but in its current development there are 4 operation theaters. If one makes a comparative analysis of the services used to be offered in this hospital and with that of recent developments, it doesn’t seek extra endeavor to see the noticeably huge difference.

The referral hospital in Medefera has also become a center for medical trainings. Since there is close attachment between this hospital and Orrota National Referral Hospital, a number of healthcare specialists such as midwives and associate nurses have been making practical practices in the hospital. This hospital doesn’t have any major deficit but since its growth need to be maintained there is a need to introduce more improved healthcare service. The hospital is however in need of radiologists and the introduction of MRI system. Since the infrastructure for such service has already been put in place, the staring of MRI service would definitely begin once the hospital is equipped with the necessary materials.

Utmost priority has been given to address the challenges of fistula complications through the assistance of local specialists and if there need be with the collaboration of partners from overseas. Bearing in mind that the better way to combat such challenges is through giving timely and specialist assisted delivery, the Ministry of Health has been engaged in encouraging people to come to the hospital. The major contributor towards addressing varied healthcare issues is people’s awareness in maintaining health life style. Annually the hospital conducts fistula surgeries and some of these include 77 fistula surgeries in 2007, 128 in 2010 and most recently the hospital operated 104 mothers with fistula problems in 2011.

When compared to prior healthcare status the opening of Mendefera Referral Hospital has solved a number of healthcare issues of the entire population of the Southern region and it has in fact become part of the success story Eritrea has been registering in the healthcare service.

From the end of the World War to the federation period