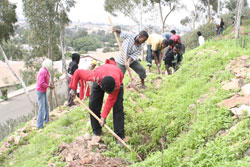 The pertinent government bodies said that the SWP was effectively implemented in the Central region. This was disclosed at an assessment meeting conducted on September 15 at the Asmara City Administration Hall.

Asmara, 17 September 2012 – The pertinent government bodies said that the SWP was effectively implemented in the Central region. This was disclosed at an assessment meeting conducted on September 15 at the Asmara City Administration Hall.

Speaking at the meeting jointly organized by the Agriculture and Health Ministries’ branch offices in the region, sub-zonal Administrations, community representatives and stakeholders, Mr. Yemane Abai, head of economic development in the Central region, lauded the active role of participants in the undertaking. He further pointed out that the availability of the necessary equipments along with the motivational role of the inhabitants had given added momentum to the process.

Mr. Abraham Berhe from the Education Ministry’s regional office indicated that 15,000 students and 828 coordinators took part in the SWP that was conducted in 54 sites targeting soil and water conservation, promotion of traffic safety, TV tax collection, archiving and other activities. Accordingly, more than 746,900 cubic meters of terraces and 3,000 cubic meters of water catchment walls have been put in place in the region, besides the plantation of 330,000 tree seedlings.

Mr. Abraham Teklu, head of forestry and wildlife in the Agriculture Ministry’s branch office, explained that such undertaking is a significant ground to nurture the spirit of work among the young generation, and that it would serve as a spring board towards further accomplishments.

Speaking at the conclusion of the assessment meeting, Mr. Kahsai Gebrehiwet, Administrator of the Central region, explained that afforestation is one of the prioritized development domains in the region, and called for the strengthening of follow-up undertakings to this end.