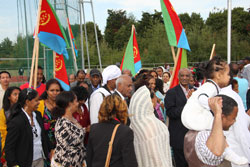 The Eritrean community members in the United Kingdom conducted festival from 15 to 16 September with patriotic zeal.

Asmara, 18 September 2012 – The Eritrean community members in the United Kingdom conducted festival from 15 to 16 September with patriotic zeal. A number of citizens residing in Scotland, Ireland and other corners of Europe participated in the festival in which various activities were conducted, including those targeting children and youths.

Mr. Abdalla Jabir, Head of Organizational Affairs at the PFDJ, gave extensive briefings regarding the objective situation in the Homeland and the development accomplishments being registered vis-à-vis the government endeavors being exerted towards ensuring social justice and economic development. He further indicated that the accomplishments being registered at a time when the nation is facing successive acts of external conspiracy are a springboard to a bright future.

Mr. Tesfamichael Gerahtu, the Eritrean Ambassador to Britain and Ireland, called on the Eritrean community members to sustain participation in the national development drive.

Mr. Ahmed Mohammed Mahmoud, chairman of the Eritrean community in Britain, voiced conviction that such event is a good basis to depict national unity and nurture cultural, as well as national values among the young generation.

Reports indicated that different exhibitions, cultural shows, sports contests and other activities were highlighted at the festival.