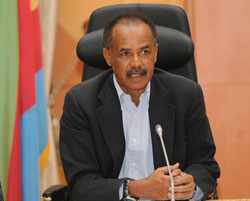 A meeting of Regional Administrators was conducted today at State House.

Asmara, 19 September 2012 – A meeting of Regional Administrators was conducted today at State House.

The meeting that took place under the chairmanship of President Isaias Afwerki focused on the 2012 rainy season and its impact. In the reports they presented, the Administrators pointed out that fair distribution of rainfall was witnessed in most of the regions that depend on rain-fed farming, and that wider farmland has been put under cultivation as opposed to the previous year. They further explained that the cultivated crops are in good state thanks to the ample preparations made and the availability of the required machinery.

Detailed account was also presented at the meeting pertaining to the nationwide endeavors made towards ensuring satisfactory crop harvest, development of fruits, vegetables and livestock, expansion of irrigation farming, as well as the construction of dams, micro-dams and water diversion schemes, among others.

Furthermore, the meeting heard briefings as regards the action programs for 2013 to 2015 in each Administrative region that include soil and water conservation, development of oil crops, use of select seeds, establishment of enclosures and afforestation, in addition to the development of animal resources in general.
The meeting of Regional Administrators also held discussion on the accomplishments made regarding the putting in place of infrastructure and social service facilities, besides farming activities being undertaken in both the Northern and Southern Red Sea regions on the basis of rain water flowing from the Highlands. It also dealt with the endeavors being made to develop the country’s marine resources.

In briefings he gave at the meeting, President Isaias pointed out that action programs pertaining to the streamlining of administrative mechanism on the basis of the required information system and technical, as well as administrative staff are set for implementation. He further stressed the need to reinforce Local Government administration with a view to providing vital impetus to the implementation of development plans, and combating illicit activities in connection with land use and housing.