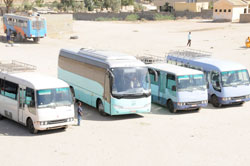 It can be said that different infrastructural works have been put in place throughout the entire Southern region. Owing to such development works so far accomplished, most areas of the region are reachable via transportation facilities. Transportation service has now become easily accessible that a number of vehicles are transporting people and goods from and to different areas of the region as well as to other areas of the country through the around 9, 00 km asphalted and dirty road networks. But, a few areas still need for the implementation of viable infrastructural works. The standards may differ, but there are no cities or villages that have not been connected via road networks. Of course, some areas around Senafe, Adikeyih and generally some areas of the Easter escarpments of the region need to have a better service.

Distribution of transportation services in the Southern region has been improved since 2010 with the starting of Harat Transportation Company. Thus, Harat has been offering better transportation service even to places that have not been reached before or to areas that were in need of an improved service; such as areas around the routes of Adikeyih-Demhina, Mendefera-Mai-dima, Dekemhare-Tseorena, Adi-Qula-Mai-Mne and other far areas.
Generally, it can be reiterated that there is good distribution of transportation service throughout the region. Despite the growth registered in providing the required access, there is no sufficient number of terminals with the exception of the two well-constructed terminals in Dekemhare and Mendefera.

There are about 300 privately owned buses which have been giving services in different areas of the region. It is in addition to such number of buses that Harat Transportation Company has been making due contributions in giving coverage to areas that have not been reached earlier.

The major concern in which people pose questions about is the conditions of transportation buses. Are the buses that have been giving transportation services in good working condition? There are still concerns that many of the privately owned buses are old and need to be repaired or changed with newer ones. It is in fact not only the quality of roads that could determine safety of passengers. So, Harat Transportation Company has been alleviating transportation problems and more importantly in easing safety concerns. Newly imported standardized buses of this company have been addressing the challenges that have been seen in safety of goods and passengers.
As mentioned earlier, there is no shortage of transportation facility in the southern region, but such a service would be improved in grate deal once the privately owned buses start to work as a team through establishing associations and this coupled with the good start of Harat would bring a change in the efficiency of  transportation service.

Concerted efforts have been exerted towards introducing better transportation. As part of the ongoing endeavors, major plans charted to be implemented in 2013 include the construction of new terminals in Dubarwa, Segenyti, Senafe, and renovation of Mendefera Bus Terminal, renovation of damaged roads, opening of new routes to different rural areas, opening of new terminals in different towns and semi-urban areas, as well as enhancing control mechanism with an aim of ensuring safety of passengers.

Is a new world order emerging?

Nothing is Impossible with Hard Work and Spirit of Willingness