The legend of fiat tagliero 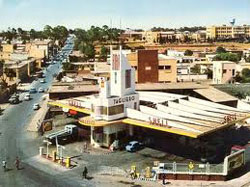 Two weeks ago I noticed that in an edition of this column there was an article on the classical cars FIAT in Asmara. As interesting as it was it also mentioned some information of the FIAT TAGLIERO BULIDING, the main service center for the brand. And I wanted to add a little bit more about the famous artistic construction.

The Fiat Tagliero Building was built in 1938; it is an architectural ode to the automobile Fiat’s Lingotto factory in Torino. It’s also the most magnificent futuristic gas station ever built even if Tagliero is thousands of miles from Italy’s industrial heartland.

Perhaps it is the best-known building in Asmara. Shockingly modern automotive-themed buildings are not the first things that come to mind when one thinks of colonial architecture in Eritrea. Yet that’s precisely what the Tagliero is. Between 1890 and 1941, Eritrea was an Italian colony. And under Mussolini’s Fascist Italy, architects who were too avant-garde for Europe were shipped off to the province of “Africa Orientale Italiana” to show in the Eritrean Highlands what a modern city looks like.

They did with reckless abandon. In a few years, until Eritrea was lost to the British in 1941, Italy’s crazy ones, misfits and rebels  saw things way too differently and built a city which makes most cities look timid and traditional even seventy years later.

Considering the Tagliero building, the work of architect Giuseppe Pettazzi, it is shaped like an airplane with concrete wings which reach 50 feet, completely unsupported. This futuristic “l’aeroplano” (airplane), in the southwest of

the city. The central tower with its glass ‘cockpit’ is similar to many structures in Miami, USA.

Legend has it that Pettazzi’s plan was deemed structurally unsound by local authorities, and that at the construction site, Pettazzi held a gun to the foreman’s head to force him to stick to his original plans. When the construction was finally done Pettazzi stood on one of the wings with the revolver against his head as he vowed he would shoot himself if his masterpiece didn’t hold together and demanded the workers to remove the supporting pillars. He gambled his own life. They hesitated beforehand for the simple reason that as the pillars were removed the building would have collapsed along with the architect. Marvelously the wings stayed still…. time proved him right in fact  seventy-four  years later, after British then Ethiopian occupation, the twenty one years of independence, the building still stands.

The rest of Asmara edifices shine just as much as the Tagliero’s bold lines with fabulous history engraved in them. They are not just beautiful, but were well planned, well-built and, above all, functional and of great aesthetic appeal.

Africa’s Secret Modernist City has 240 pages of similar structures, from Italian cinemas to apartment buildings to Alfa Romeo service stations. It is an insurrection of modernity and it is ironic how all these spectacular beauty are the product of a Fascist dictatorship which acted like all colonial powers did, suppressing and exploiting the Eritrean population.

On a brighter note, they did something else too: they taught us how to make a proper macchiato. Apparently it is still as classy as it used to be back in the days and it’s still appreciated by people of all age in this wonderful city.

Nothing is Impossible with Hard Work and Spirit of Willingness