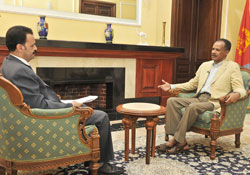 In the interview focusing on the nation-building process, regional and international developments, Eritrea’s relations with the countries of the Horn of Africa, the Middle East and North Africa, as well as the situation as regards regional and international organizations, the President underscored the dangerous consequence of trying to draw benefit at the cost of others. He further pointed out that the prevailing problems and conflict situations in various regions are the direct consequence of such self-centered exploitative stance, and that Eritrea pursues a strategy aimed at promoting mutual respect, complementarity and cooperation with all countries.

Replying to a question regarding Eritrea’s relations with Egypt and Somalia and future prospects in light of the new developments, President Isaias indicated that it is not Eritrea’s political tradition to relate issues with change of individuals and governments, and that the existing problems in this region are but the consequence of external political and military interferences. In this connection, he cited the Somali and Sudanese issues, and explained that the historical ties among peoples and nations is a lasting phenomenon as ample experience has been acquired vis-à-vis the growing peoples’ consciousness over the past 20 years that witnessed external acts of interference and their obstructionist aftermath.

President Isaias went on to elaborate that Egypt’s role in Africa and the Arab world has been weakened over the past 30 years due to its North-oriented stance, and thereby giving rise to negative consequences in the region as a whole. In this connection, he pointed out that it would take time to diagnose whether or not the country would assume its former stature, taking into account the existing state of affairs.

In this connection, the President underlined the paramount importance of an Egypt that ensures independent policy that serves mutual interest, in addition to giving priority to the interest of its people and the region as a whole, and thus retrieve lost opportunities.

Regarding security in the Red Sea region and the role of neighboring states, President Isaias elucidated that no country in the region can ensure security of the zone all by itself as its waterway is of top strategic importance both at the regional and international level, and that it is a prerequisite on the part of all the littoral states to vigorously oppose external interference, in addition to fostering relations of partnership. Moreover, he emphasized the need for these countries to put in place the necessary mechanism at the economic, security, investment and infrastructure level to this end.

Indicating that the countries of the Red Sea region jointly possess the capacity of ensuring security in the zone exceeding that of any foreign country, President Isaias called on the nations of the region to foster cooperation and working in unison so as to achieve the cherished goal.

On Eritrean-Qatari relations, he said that it is both strategic and based on correct appraisal of issues, as well as continued consultations and respect to political options and stances. The President further explained that Qatar takes a part in investment opportunities in Eritrea, as do Canada, China and other nations.

Also replying to a question pertaining to changes being witnessed in the Arab countries, President Isaias noted that it is not proper to explain such a phenomenon from the standpoint of a single context, and that people in different parts of the world are drawing vital experience from such changes. In this regard, he underscored that it is not in the political tradition of the Government of Eritrea to assess developments within the context of apparent semblances but rather from the standpoint of sober analysis.