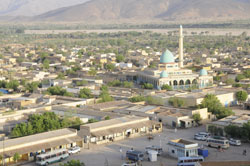 AKordet is one of the major cities of Gash barka- the largest of Eritrea’s six regions. If one ventures to this city as a visitor, definitely would find it hard to miss the beautifully constructed buildings of the 19th century that are stretched in a line at the very gates of the city. What this buildings hint about is that the city is among the more than century old cities of the country. Akordet is the central administrative city of a sub-zone which covers 15 administrative areas. Akordet sub-zone borders with Anseba Region and Mensura sub-zone in the East, with Mogolo in the North and with Dge in the West. What are the development undertakings that have been carried out to date, what looks like the livelihood of its inhabitants, what about the opportunities and prospects of its all-rounded growth are indeed some among the questions that could be posed.

Akordet sub-zone is inhabited by above 56 thousand people. Most of the 19,000 inhabitants of Akordet city, almost 76 thousand, lead a nomadic and pastoralist life style, and some 10% engage in trading activities and the rest carry out irrigation based farms around the river banks of Barka River and they by largely conduct small-scale and seasonal farm activities. Administrative areas of Shelab, Hawagu and Deret, and Albanyai are some among the seasonally cultivated areas of this sub-zone.

As regards trading activities, most of which are conducted in cities and semi-urban centers that are situated along the asphalted roads.

Healthcare institutions in Aderde, Deret, and Solib and more importantly a healthcare center and a hospital in Akordet city has been rendering medical care services to the inhabitants of the sub-zone. Alongside the services that have been offered to the inhabitants of this sub-zone, there are also plans to broaden such medical treatments in an enhanced manner. Mr. Awreleyo Gakemeno, Administrator of the sub-zone, pointed out that there is a plan to construct additional healthcare institutions in different central areas of the sub-zone.

The education sector is among the social services that has been showing commendable progress. The availability of educational institutions in all administrative areas of this sub-zone is indeed an indication of the growth that has been registered in this sector. A boarding school in Akordet has been offering services to students who promoted from primary to junior level. This way, the students from the environs of this city has been gaining better educational access. Despite such a progress in the education sector, there are two administrative areas, Hawagu and Gustiet, which have been educating students in makeshift schools. So, these two administrative areas are still looking for the implementation of better infrastructure.

Supply of electricity has by far been improved, particularly in Akordet city. Generally, as plans have been charted out to introduce supply of electric energy to different villages of this sub-zone, such a development would impact all social services within this respective sub-zone positively. Among the services that are expected to be directly influenced by the electric power supply is in fact the telecommunication service and thus there would be defiantly an enhanced telecommunications services as soon as the necessary infrastructures are put in place.

If Akordet sub-zone and particularly the Akordet city are to be in a better place of development, replacement of waterline pumps and renovation of swage systems need to be implemented as soon as possible. Asphalting the 3 km long road of the main streets of Akordet is among the plans that are charted out to be implemented in the near future.

Buildings of Akordet have their own charm and are symbolic representation of the city. These ancient buildings make this city highly different from other cities within the Gash-Barka region. Akordet mosque, which was ranked third from all mosques throughout Africa, is also the city’s beauty. What is more is that, prospects of mineral resources are among the promising futures of this sub-zone. Next to the Northern and Southern Red Sea regions of the country, this sub-zone is also uniquely represented by large distribution of ostriches.

All in all, this sub-zone has shown commendable progress in different sectors and the infrastructure that would be put in place in the future is expected to add momentum in its future growth. If the existing deficits are addressed efficiently, Akordet city and generally the entire sub-zone would continue to be a center of attraction and more importantly if Asmara-Akordet railroad and steam locomotive transportation system revitalized to its working conditions as used to be prior to its dismantling by the Derge regime.

I even Become More Intelligent after I Get Married