Arbate Asmara: the origin of the city 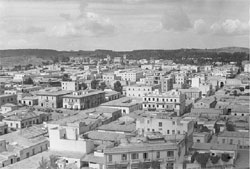 Although it would be easy to think of Asmera, the Eritrean capital, solely as an Italian built colonial city, its origins actually reach hundreds if not a thousand years before.

Asmara stands alone as the only capital, other than Cairo, that is founded on the ruins of culture that gave birth to contemporary life; as such it resembles other capitals that boast great antiquity, such as Rome or Athens. It traces back its origin to 800BC with a population ranging from 100 to 1000 people.

The city was later settled in the 12th century by shepherds from Akele Guzay. They founded four villages on the hills. Mostly Tigrinya and Tigre people use to live around there. These four clans living in the Asmara area on the Kebessa Plateau were: the Gheza Gurtom, the Gheza Shelele, the Gheza Serenser and Gheza Asmae. These villages fought each other until the women of each clan decided that to preserve peace the four clans must unite. The men accepted, in fact the name Arbate Asmera litteraly translated is: “the four (feminine plural) made them unite”.

Eventually Arbaete was dropped and it has been called Asmara ever since then. And there is only one zone that kept the original name and still today it is called Arbaete Asmera. After the Italian colonization the pronunciation changed and became Asmara. The westernized version of the name is used by a majority of non-Eritreans, while the multilingual inhabitants of Eritrea and neighboring peoples remain loyal to the original pronunciation, Asmera. An Ethiopian legend tells that in this region the Queen of Sheba gave birth to the son of Solomon, Menelik I. Legend has it that the queen went to labor while she was travelling, stopping she asked for water “mai belalei” (ask for some water) and from that the whole neighborhood, in which she was, is called “mai bela”.

The missionary Remedius Prutky passed through Asmara in 1751,more than a hundred years before the Italians, and described in his memoirs that a church built there by Jesuit priests 130 years before was still intact.

In this period Asmara was known as a part of the kingdom of Medri Bahri (later Republic of Hamassien).

Emperor Yohannes IV of Ethiopia occupied briefly  the area and gave his trusted Ras Alula the title of governor of Medri Bahri. Alula moved the capital of the province to Asmara, which then had about 150 inhabitants. At this

time, the largest city in Eritrea was Debarwa, now located in the Debub Region. This was the historical capital of the Bahri Negasi of Medri Bahri. Within four years, the town’s population numbered more than three thousand, and its commercial importance, with increased trade with Massawa, grew considerably.

So in few words Asmara indeed became more modern but it was a city that had a long history before it fall to European colonialism.

Asmara already has what other cities are trying to recreate. It is probably the only open-minded capital- vibrant and multi-cultural, harmonious and hospitable, a place of greetings and generosity- in the world. Shops stay open late, bars, cafes and restaurants are full, giant cinemas attract the crowds. Families gather, friends meet, women walk unmolested, children are safe, and visitors can linger and feel at home. These are things of the past in almost all other cities in the world today.

I even Become More Intelligent after I Get Married