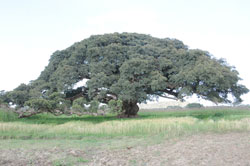 After visiting the four places the tour participants returned to Mendefera and after lunch headed to Seganeity, to the renowned area for its plenty of Daeros (sycamore). The Daerosare around 400 in number and many are from 200 to 400 years of age. From the many Daeros (sycamore) there are two that take the attention of visitors, Daero Five and Daero Africa. Daero ?ve is the one that its photo is on the Five Nakfa note. Daero Africa was renamed after an international conference, Against All Odds where many literary people and renowned writers from all over Africa participated, was conducted underneath that tree.

Formerly it was called Daero Mecanicco, may be an Italian mechanic used to ?x military vehicles under it. According to the elders who came to brief the tour participants the two Daeros have a special place among the population surrounding them. They were trees where community meetings, settlements of disputes, marriage arrangements and other many social activities were conducted. The Daeros were acting during those times as government and public of?ces where all kind of social and economic problems were discussed and ?nd settlements. The Daeros are and were also source of food for their fruit is edible. One of the elderly who were giving brie?ng to the tour participants said that once upon a time a man was taking his cow to the market to sale and to bring some food with the money from the sale of the cow. Upon his arrival to the Daero Five he found out that the fruit of that tree was ripe and ready to be consumed. The man ?lled his sack with the fruit and returned back home and the cow was spared from sale and until to day the tree is also called the “cow saver”. The man had no need to sale his cow for it was for money to buy food that he intended to sale it. During the ?rst day of the tour all participants were very much satis?ed with what they heard from the people who know every bit of the story of the places and the legends of the monasteries.