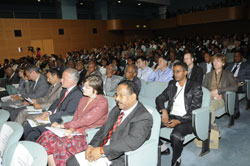 The mining sector has been the major interest of junior and big companies and enterprises. With the discovery of new mining areas such companies have been expanding their branches to areas that interest them most. Eritrea is one among the countries which has attracted a number of exploration and mining companies as well as other service giver companies from around the world. With this new development, it has become very crucial to open a discussion platform for the mining companies and mining related service giver companies. So, this year’s Asmara Mining Conference is just the sequel of last year’s Geo Congress and that of  such discussion held in 2010 where experts in the mining sector, investors and other interested participants shared views of mutual interests.

The Asmara Mining Conference of 2012 has therefore shade a light on the developments registered since last year’s Geo Congress. Hence, experts in the mining sector have presented key note speech in their areas of specialties and the mining companies and service giving companies gave update information on the activities that have been carried out to date. Delegates from Saudi Arabia, Republics of Sudan and South Sudan and from republic of Yemen and other also presented papers on the overall mineral potentials in their respective countries with an association to the Arabian Nubian Shield.

The morning hour of 2 September 2012 was the opening of the mining conference. Eritrea’s Minister of Mines and Energy Mr. Ahmad Haj Ali accorded worm welcome to delegates, mining experts, and participants of the conference.

It is important to bear in mind that Eritrea has a firm stance in strengthening regional integration as is the corner stone to the development of mutual cooperation. Thus, the Minister of Mines and Energy emphasized the need

for ensuring the economic integration of the Arabian Nubian Shield Region as an effective means to achieving the set objectives of sustainable development through removing barriers that could delay the mineral-based industrialization.

“The government’s mineral sector development strategy aims at encouraging diversified investments that ensure optimum exploration, extraction, processing and marketing of its mineral deposits.” Mr. Ahmed Haj Ali underscored, “Great emphasis is given to the socio-economic and environmental impact of the industry.”

Hence, the discussion held at the conference and the papers presented about the marketability of mining production, socio-economic and environmental have relevance with such policies. It is however important to notice such a goal could only be achieved with the collaboration of mining companies working in Eritrea. That is why Mr. Ahmed said, “We are delighted to have you all share with us an important mile stone in our progress towards a more sustainable future.”

As there have been mining sites that are about to start mining, the major focus of the conference was on the safety, sustainability, socio-economic and environmental impact of mining and, of course, the commercial aspect of it.

Prof. Maarten Johan De Wit from Nelson Mandela Metropolitan University presented a key note speech in the title “Earth stewardship science-with everybody a stake holder.”  In his presentation Prof. Maarten discussed about future prospects of energy and also about various factors which are the very cause for the decline of resources and making imbalances to the ecosystem through endangering the natural resources. Mr. Kelvin Moxham, general manager of Bisha mining Share Company gave update information of exploration and mining activities. The ongoing development in Zara exploration and mine site was also presented by Mr. Michael Kelly, General Manager of the Zara share company.

In the afternoon hours of the presentation and discussion session, Mr. Leonardus Johann Gerber from the University of Dundee also discussed about ‘Emerging Trends in the Regulation of the Mining sector’ that include corruption and transparency, dispute resolution, environmental concerns and mine enclosure. An update of Asmara exploration activities was also presented by Mr. Mike Hopley, President and CEO of sunridge Gold Corp.

Day one of the conferences was closed with the presentation of Mr. Alem Kibreab, Director General of Department of Mines in the Ministry of Mines and Energy. Mr. Alem highlighted about the endeavors that have been exerted in human resource development in relation to the mining sector. He cited activities of Bisha mining share company as exemplary. According to Mr. Alem the human power succession plan needs to include educating locals, giving employment opportunity for women, as well as equally training both artisanal miners and senior experts which could in turn impact the growth of the mining companies. The Development of Geothermal Resources and how Eritrea could be benefited from such a resource was also among the discussion points. “The collection, management and utilization of an integrated Geo-data Base in Eritrea” was also presented by Mr. Abdulkadir Ibrahim and Mr. Awet Fisssehtsion. Such information was indeed of a tremendous value for the exploration and mining companies that have been operating in Eritrea. Other papers presented in the conference were also of a good importance towards sharing valuable ideas among experts and service givers in the mining sector.

There are mine sites that are expected to increase the mine life of Bisha Share Company. Thus, Harena- a small gold mine would give extra life to the quite encouraging achievements of the company. Thus, Bisha mining project is expected to be extended to Harena and with the acquisition of the North West area it would later be expanded to Hambok- an area around Mogoribe.

Bisha mining project has indeed pioneered the mining activity into tangible developments. Exploration and mining activities that have been carried out in different sites are also really encouraging. The Zara mining project which is now owned by China SFECO group Shanghai and by ENAMCO, each holding a share of 60% and 40% respectively, would become the next successful mineralization activity next to that of Bisha.  Shipment of construction materials is expected to happen in December 2012. The Koka Gold Mine which is licensed under the Zara project is of outstanding potential. The necessary precautions have already been underway that around 500 persons would be resettled from kaka valley to Geftio – a site where the new settlers would find access to water sources. Site construction is expected to start within the coming 6 months and the first gold pour and success announcement is expected to be in 2014.

The exploration and mining activities that have been carried out in Eritrea would not only become a stepping stone for the improvement of the mining sector but would impact the infrastructural development of other sectors as well. In the course of constructing or renovating roads networks that pass along the main route to the mining sites, better road connectives would be constructed. For instance, the main road access to the Koka site has been the route that goes from keren through Akordet, Mogoribe, and kerkebet to the targeted destination. Hence, the access form kerkebet which is in a poor condition would be upgraded so as to provide an effective and safe all weather access. The development in the mining sector would also increase the rate of employment opportunities for the companies would look for local labor.

What is more is that the sustainability of the mining activities that have begun in Eritrea would be secured with the finding of feeder sites which are expected to add resources to the already begun mining activities. As such, Konate, Debre Kunate, Debre Tseada and areas south of Koka would add gold resources to the Koka mine. As mining works already started the construction of initial temporary camp for 350 workers would is also about to be speed up.

Remarkably the Asmara project which embraces Asmara, Emba Derho, Adi Nifas and Dubarwa sites would become the largest Gold mine project in Eritrea and particularly the deposit in Emba Derho. The main processing plant would be in Embo Derho for is the largest deposit of the other Asmara’s mine projects.

Even though looking for a better alternative, Sun Ridge is planning to develop the Dubarwa mine as a standalone project. Socio-economic and environmental assessments has been done so as to properly address water and land issues.

Colluli potash mine has also shown remarkable progress. The South Boulder is about to complete Definite feasibility study by July 2013 and is looking forward to start site construction between 2014 and 2015 and the first production would be in 2016.

Displaying Painting is A Stage Where You Know Your Stance

Thirty years on the road of HRH development