Debre Libanos of Ham: The ancient and historical monastery 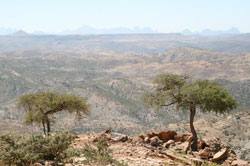 The ancient and historical monastery of Ham is believed to have been founded in the late fifth or early sixth century by the Syrian missionary Aba Meta or Matewos known as Libanos. The monastery is located about 150 km from Asmara. Originally located in the village of Ham, the monastery was later moved to its present location perched on the edge of a cliff below the Ham plateau. Its Church contains the Golden Gospel a metal covered Bible containing copies of land charters that date back to the early 13th century, and a number of mummified bodies which are still in the process of being dated.

The mummified bodies are wrapped in cloth, tightly wrapped with animal skins, the same kind of yellow cloth and animal skin that are worn by monks today. The few specimens of complete mummified remains had only the feet and hands exposed; the rest of the body was completely wrapped in skin. Astonishingly on the hands and feet, the skin and nail were very well preserved.

There are so many controversial and sometimes paradoxical sources for the origin of mummi?cation in Eritrea. The fact that Abba Libanos (whose body is believed among the mummies at the place) came from Egypt where the

practice is mostly known may imply that he might have brought the practice with him. According to oral tradition, the mummi?ed skeleton remains that are found in the monasteries of Eritrea are bodies of religious individuals that inhabited them. The reason for mummi?cation and the exact time for the introduction of the practice are not known. But according to the oral tradition, the practice might have been introduced by about between the 5th and 8th centuries AD together with the monks who were coming to Eritrea from the Middle East via Alexandria to expand Christianity. The Monastery of Debre Libanos, Ham, is known not only by the mummies but it is also an ancient monastery. The church rituals, the dress of the monks and the mode of living of the people who live there are as ancient as they were. In the monastery of Debre Libanos there is no private property. Everybody lives the same and shares the same. The food they eat is centrally prepared and distributed to every individual. Even if one monk wants to shave his hair he has to get permission from the Megabi (the leader).

Upon arrival to the monastery visitors are treated in a way that they feel that they are some where back in history. Monks come with bowls filled of water and invite you that they wash your feet. That is a sign of courtesy and well come to the sacred place. The practice has been conducted since the establishment of the monastery centuries ago.

This site is considered one of the wonders in Eritrea and one of the most important in the country that has the potential to attract tourists.