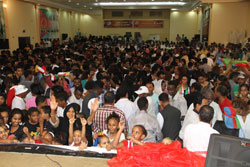 The Festival that Eritrean nationals residing in Jeddah and environs conducted with patriotic zeal has concluded.

Asmara, 6 October 2012 – The Festival that Eritrean nationals residing in Jeddah and environs conducted with patriotic zeal has concluded.

The festival featured various activities such as general knowledge contest, fashion show, cultural and sports contests, as well as different exhibitions, besides seminar. Around 2,000 youths and children took part in the event. The participants of the festival also expressed readiness to put up staunch resistance

against external conspiracies, and said that they would enhance participation in national development programs.

Reports indicated that participant who won contests and the ones who demonstrated outstanding contribution in organizing the event were awarded prizes and certificates of merit at the closing ceremony during which Bisha Cultural Troupe presented impressive performances.