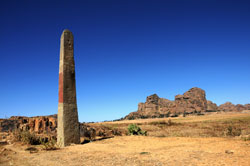 The historical site of Metera is located at around one kilometer south of Senafe (legend has it that Senafe comes from two Arabic words Senaa fen to mean where is Sanaa). This ancient site is referred as Belew Kelew by the surrounding local people. The site has similarity of different features and constituents with other sites found in the country. Different scholars believe that Pre-Axumite ceramic types from Metera have strong resemblance with the ceramic forms at ancient sites of Greater Asmara area which dates back to 800-400 BC. In addition to this there is an association between the Pre-Axumite inscription at Metera and in South Arabia and the Red Sea world goddesses and gods of the 1st millennium BC. The ruins at Metera clearly indicate the importance of this ancient city. In the middle of the ruins there is a large structure made of large blocks of chiseled hard lime stone with a stair way leading downwards a corridor, which according to legend is said to have led the way to Axum.

The works carried out in Metera has progressively revealed a town with an architectural ensemble and a popular residential quarter. There was evidence of social hierarchy at Metera i.e. between the common people and the elite group. The central Axumite period occupation at Metera was 20 hectare in extent and roughly divided into western and eastern sections, with elite “villa” residence, churches and a western section with commoner and intermediate level domestic buildings. The outdated excavation in Metera resulted for the deterioration of the site both by human in?uences and natural elements. This site was excavated by the French archeologist Francis Anfrey thirty ?ve years ago. According to him the Axumite period at Metera is interpreted as having pre-Christian and Christian periods, based on architectural forms and basic pottery attribute features. In the year 1959, a mission was established to conduct excavations at the site of Metera. These excavations revealed the ?nding of useful and priceless archeological objects and features, including earthen ovens, vases and oblong mill stones. One of the most signi?cant and precious ?ndings of this site is a bronze lamp weighing 6,500 Kegs and 41 centimeters high. It is surmounted by a motif of a round bump representing a bouncing Ibex and a dog grasping it while running: its teeth planted in the rear-legs. This bronze Ibex belongs to the Pre-Axumite period and currently it is found in Addis Ababa museum. Architecture in Metera is not different from that of Adulis. Substructures of entire constructions are kept at a height over two meters.

The archeological sites and mounds found in the extension of the site can reveal the evidence of Pre-Axumite and Axumite settlement periods. Besides this, the evidence can be traced from the excavated vestiges along with

their beautiful architectural features. The stairs technology of the settlements, standing architecture and the stele of Metera provide us with ideal image of the ancient city of Metera. The traditional way of building houses, the “monkey head” technique, (it was the most characteristic structural method before and during the medieval period) and local masonry tradition is still continuing around the villages of the archeological site of Metera. Some of the evidences also reveal the presence of both Christian and Pre-Christian periods. During the 19th century various Europeans visited the site and recorded their observations. By the early 20th century documentation of Metera and the surrounding Senafe area included broad geographic, geological, ethnological and archeological reconnaissance survey carried out in 1906.The ?rst systematic and sustained archeological research at Metera occurred between 1959 and 1970, when Francis Anfrey conducted multiple ?eld seasons of excavation with some survey from the Ethiopian Institute of Archeology. Pre-Axumite deposits were documented by Anfrey’s excavation. Two excavated strata at Metera are believed to date to the “Pre-Axumite” period, in which the upper level is associated with some architectural features including schist slabs and various ceramic types. The second and lower level, below architectural features, contained red-brown burnished ware with engraved decorations, red-orange ware with black interior, cream ware amphorae, black polished ware and blacktopped ware. The stele of Metera is unique of its kind, so far in the whole of Eritrea, with its pre-Christian symbol of the sun over the crescent often associated with the moon god Almaqah of south Arabia. We ?nd an inscription in early Geez or proto-Geez script reading King Agaza dedicates this stele to his ancestors who had conquered or who made submit the mighty people of Awanjalon, Tsebelan. The stele of Metera was deliberately hit with a land mine by the TPLF soldiers to deny the people of Eritrea their history. Such a blatant and inferiority complex driven act of the regime is not for the ?rst time happening in Eritrea. The stele was partly destroyed and it was restored under the supervision of the National Museum of Eritrea in collaboration with UNESCO.