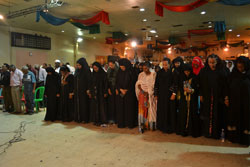 Reports indicated that the 3-day festival in which thousands of participants took part featured cultural shows and sports contests, besides activities of the Eritrean Community School and a seminar.

In a seminar he conducted to the community members, Mr. Zemhret Yohanes, Head of Research and Documentation at the PFDJ, said that no power would prevent the realization of the cherished nation-building process thanks to the steadfastness of the Eritrean people and their leadership. He further indicated that the Eritrean government is putting up endeavors towards ensuring sustainable development of the mining

sector in a manner that equitably benefits the citizenry.

Mr. Zemhret also underlined that the key for the nation’s bright future largely lies on the resistance being demonstrated by nationals inside the country and abroad against anti-Eritrea acts of hostility.