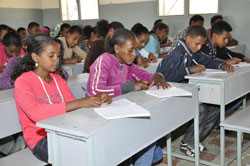 The Ministry of Education said that 15 schools have been launched in the Central region in line with the start of the current academic year.

Asmara, 16 October 2012 – The Ministry of Education said that 15 schools have been launched in the Central region in line with the start of the current academic year.

Ms. Halima Mohammed, head of the Ministry’s branch in the region, explained that the schools that have opened in the sub-zones of Gala-Nefhi, Serejeqa and Berikh at government expenditure comprise 10 Elementary schools, 1 Junior school and 4 High schools. She further indicated that more class rooms and teachers’ residential houses were built within 8 schools, while 4 Elementary schools have been upgraded to junior level.

It is believed that the opening of the schools is in line the growing educational demand in the region. Moreover, it has fostered proximity of schools to students’ residence, according to reports.

Mr. Mesfin Woldesilasie from the branch office indicated that the majority of the new schools were built in rural areas, thus simplifying the number of students per class room in their respective places of habitat.
Among students from the new High schools, Naod Teklai and Sara Tekeste said that they are in a position to save time and energy, in addition to the conducive environment created vis-à-vis the teaching-learning process.

Goluj sub-zone: Seminar conducted for farmers regarding application of weedkillers