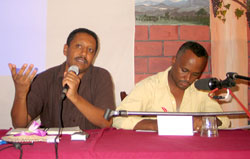 The NUEYS conducted its 13th Congress from 19 to 22 October in Tesenei city.

The Congress assessed that endeavors exerted regarding raising political awareness of youths, building the capacity of members, enhancement of youth role in education and work, as well as the Union’s regional and international relations had borne fruitful outcome.

Mr. Sultan Seid, Chairman of the NUEYS, explained that the pioneering participation of youths being demonstrated in national development programs has brought about sustainable impact for their future, and that the Union would step up efforts focusing on human resource development.

Mr. Mohammed Hamd, Administrator of Gash-Barka region, lauded the active role of youths in the nation-building process, and noted the need for the reinforcement of youth center activities and the opening of new ones.
The Congress adopted resolutions as regards enhancing integrated work among government bodies, the PFDJ and the Union and the nurturing of cadres. It also drew up action plan for 2013.