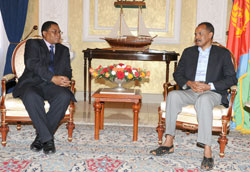 In the meeting at the State House, the President underlined the need for member states to focus on the priorities that would ensure the realization of the organization’s set objectives.

He further emphasized that they should focus on attainable action programs and lay the groundwork for trade and investment in a manner that reinforces innovativeness and avoids resort to mundane strategies.

Mr. Sindiso on his part indicated that the objective of his visit here is aimed at discussing the organization’s programs and giving briefings as regards the forthcoming COMESA conference in Kampala, Uganda, besides securing valuable ideas from President Isaias. He further explained that the meeting with the President was fruitful.

Following the meeting, the COMESA head told Erina that he highly appreciates the observations put forth by President Isaias stressing that COMESA member states should promote sound trade exchange so as to avoid economic instability. Such approach would have a positive impact as regards overcoming economic predicaments in the region, Mr. Sindiso elaborated.

He further indicated that the regional organization would strengthen endeavors to this end.