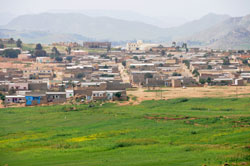 Senafe sub-zone boarders to the East with Southern Red Sea Region, particularly with Foro and Gelalo subzones, to the South with Ethiopia, to the west with Tserona sub-zone, and to the North with Adi Keyih Sub-zone. This sub-zone has more than 100 villages inhabited by above 76 thousand people from the Tigrigna and Saho ethnic groups. Like in other parts of Eritrea, people of this sub-zone have a deep rooted culture of resolving conflicts through the involvement of community magistrates. This time there are 18 community magistrates that give services to the 23 administrative areas of the sub-zone. Geographically, Senafe Sub-zone is situated at 2004 above the sea level. Its annual rain fall range is a bit above 500 mm.  Its total geographical areas covers more than 110 hectares that could be used for agriculture and for the construction of varied service giving institutions, but the rest is very mountainous area where the highest mountains of the country are situated in.

Of total area of Senafe sub-zone, above 16,000 hectares is favorable for conducting agricultural activities. However, only 10,000 hectares have been cultivated in this year’s summer. Soil texture of this sub-zone and the weather over there is favorable for the cultivation of all sorts of cereal crops. It is, however, to be noted that most of the farm lands have been cultivated traditionally. Meanwhile modern farm practices have introduced. With the reinforcement of modern farm practices around 2000 apple and around 1,750 peach seedlings have been planted in different areas of the sub-zone. Hence, 90% of the apple seedlings are in a good condition whereas there is no major progress in the cultivation of peach .Water sources such as the 31 dams and 21 micro-dams of the sub-zone have been utilized for modern cultivation programs as well as for domestic uses. Utilizing such water sources, efforts have been exerted to enable the inhabitants of the sub-zone to cultivate twice or three times a year.

The Senfe sub-zone is also well known for bee keeping activities. The farmers over there have a good know-how on bee keeping. Therefore, bee keeping is well practiced in this sub-zone. Honey harvesting has been growing

for there are more than 800 modern  and more than 2000 traditional beehives. In line with the ongoing endeavors of the farmers, more than 140 quintals of honey have been harvested annually. Traditional and modern poultry activities have also been practiced in an enhanced manner.

Dairy farming is among the farm activities which have been gradually developing. Towards satisfying demands of the people in this respective locality, a 74 membered association of dairy farmers has been engaged in boosting diary production. A research conducted in 2011 indicates a good distribution of livestock and other domestic animals.

The provisions of secured potable water supply have been introduced in the post-independence period. Owing to the existing good amount of underground water resource, the Senafe sub-zone has not yet encountered any deficits of water supply. Water has been supplied to 41 villages through drill pumps, 13 villages have been gaining access to potable water by means of solar and electric energy.

Healthcare services have been gradually growing. There are a total of eight private and public healthcare institutions. A hospital in the town of Senafe along the other healthcare institutions have been alleviating health related difficulties. Prevention of communicable diseases through sanitation programs has been very effective towards addressing some of the healthcare issues. Mr. Birhane Mengesha, administrator of the sub-zone, said that an efficient healthcare service has been offered in a wider area of the sub-zone. There are also a number of community hospitals in different areas of the sub-zone. Generally, there has been no major healthcare issue that remains unaddressed. The first phase of construction works for a new hospital in Senfae has been finalized and the second phase is also about to be completed in February 2013. All the necessary equipment has also been introduced.

Access to education has shown a tremendous progress. In Senafe sub-zone there are 14 kindergarten, 27 primary, 10 junior, 4 secondary school and all in all 55 educational institutions most of which constructed in the post-independence period. What is more is that a new secondary school is under construction in Senafe, and 4 junior schools in other areas of the sub-zone will be constructed soon.

Supply of electricity is also among the services that has shown commendable progress. There is a plan to maximize such service to a wider area of the sub-zone thorough the installation of electricity line that would be connected to Hirgigo plant.

other tourism sites like Barkneha and Abune-libanos Monastry which are known for their oldest mummies, and also the pilgrimage of Abune-Anbes. All these and other resources make Senafe sub-zone a good touristic destination.

This sub-zone would see a bright future for is endowed with timeless cultural and historic heritages and with the ongoing developments in different sectors; every visitor would gain a better service.