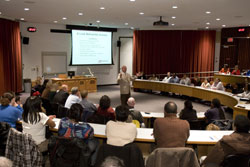 Speech making is an art that requires many aspects and one of the important aspects. First it is very essential that the speaker has to know and have deep understanding about the subject that he is going to speak about. Unless he has no full knowledge of the subject he will end up into no where. It is also paramount that the speaker has confidence before the audience when delivering a speech. The speaker is well aware that all eyes of the audience are staring at him to hear what he says and with that unless the speaker has confidence he will start to feel trembling and become short of words.

Scholars of public speech tell us that before you stand in front the public to deliver your speech to learn to speak by speaking. That means one has to do a lot practice before going public. History tell us that some of the great speakers have been at first suffering from stage fear and through hard work and practice they overcome the fear and become great speakers the world has known. They even used to go to the bush and rehearse the entire speech by talking to the trees. And when convinced that they have done enough they appear in front of the public and do the same that they did with the trees.

Scholars also tell us that public speech is similar to electricity. Either you or your audience is going to possess the positive factor. If you assume the negative you are sure to be the negative. So it is very important that you try hard to inspire the audience with what ever power you posses.

Upon starting to deliver a speech a good speaker has to pause in between and look over the audience. He did not need to be hasty for being hasty will bring lack of control and non stop that will eventually takes you out of context.

There are also some speakers would like to apologies whenever they feel have made mistakes. The speaker should go ahead with what he has to speak as if talking to a group of people that you are familiar with. Because admitting mistake and apologize to the audience is only an admittance of failure and end up being a laughing stoke.

Good speakers also know which words they have to use. Word selection is as important as understanding the subject matter. Words that have profound meaning have the chance of being remembered by the audience for some time to come.

The vocal tone of the speaker has also an impact on the audience. The variation of the vocal pitch, low, medium, high, in between the speech and when applied appropriately have a big impact to the listening factor of the audience.

With the above mentioned aspects and other method a speaker could influence and grasp the attention of the audience and deliver his message appropriately and with success.

The road that was once thought to be the impossible